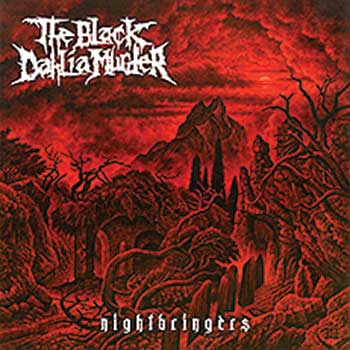 DEATH METAL HORROR: Staying consistent and inspired in the terrain of mainstream death metal can’t be an easy task. So many of those bands have watered down their sound and fallen by the wayside. Then there is The Black Dahlia Murder, who have been doing their thing for a shocking 16 years now and still know how to rip the scabby flesh off the wound as violently as possible. The band’s eighth full-length Nightbringers is one of the most savage of their career so far, and it breathes new life into this death metal institution. You know what to expect by now—horror and plenty of it. They still rely on that to this day, but it never gets old. The ferocity in which they play this material is stunning and refreshing, as they haven’t bowed to polishing up their sound or making anything more palatable. These are nine tracks that go right for the jugular and succeed every time. Vocalist Trevor Strnad also sounds as bloodthirsty as ever, as he fuels this goddamn horror machine through these cuts. Take on the throat ripping opener “Widowmaker” and get utterly pulverized. Stay for attitude infused “Matriarch,” the crushing title track, the gut slicing “Jars,” and “Kings of the Nightworld,” where the band defies ideals forced on us by the ages and instead goes for cold, blistering freedom of mind and spirit. ~ Brian Krasman