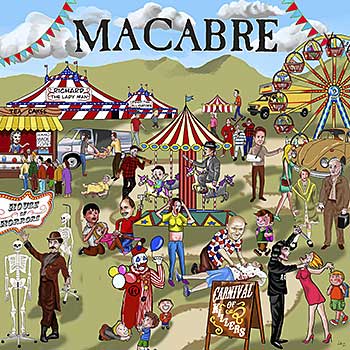 MURDER METAL: The kings of murder metal return after a long 10 year absence with their vicious new album Carnival of Killers. The theme of ruthless killers in a fun carnival theme is only too perfect, and this album is by far one of Macabre’s best. The band has mastered the art of doing something different and progressing yet keeping their core sound, and you hear this in Carnival of Killers. They maintain their chaotic and brutal sound but with more fun child-like melodies and vocal diversity by Corporate Death. Complete with their morbid tales about the world’s most notorious serial killers, Macabre has created a carnival album that will only cause bloodshed. This is a monster of an album—there are 16 slaughtering songs that will surely sharpen the knife and salt the wound.

Strap yourselves in and keep your arms and legs inside the ride at all times. The Carnival of Death is about to begin! The album opens with a fun carnival intro. You immediately get visions of bloody carousels, deadly carnival games, and Gacy-esque clowns coming to get you. The carnival intro then turns more brutal as “Your Window Is Open” begins. The song is absolutely chaotic, perfectly symbolizing Richard Ramirez’ deadly onslaught on Californian families. Spastic drumming with Corporate Death’s breathy growls fill your eardrums in the opening verse, but in typical Macabre fashion, the chorus becomes extremely catchy. Corporate Death’s vocal range comes into play—the back and forth chanting of his evil voice (“You left it wide open”) meets his cleans (“You cannot escape”).

Towards the middle of the album, the screeching guitars of “Breaking Point” fill your eardrums, leading to the second single “Lake of Fire.” This is by far one of their most brutal songs—the drumming is fast and Corporate Death uses his angry vocals throughout the entire track. You can hear the band’s progression, with the extremely catchy chorus and guitar solo, but you also get the brutality from the Dahmer era.

One of the best songs on the album is “Warte, Warte,” about the serial killer Fritz Haarmann, and the song is sung entirely in German. The song is based off of another song that was popular in Germany during the 50s, and Macabre makes it a successful and fun rock song that anyone can dance to. Corporate Death sings in clean vocals throughout “Warte, Warte,” making the song sound even more authentic.

The finest aspect about this album is how every song sounds so different. “Corpse Violator” is a perfect example. It’s the same chunky riffs throughout the song and fast drumming patterns, only Corporate Death uses clean vocals instead of growls. His wide vocal range is also evident, using both his natural baritone range and high octave falsetto throughout this song that is clearly about Ed Gein.

The album ends on a powerful note with “The Murder Mack,” one of the many songs on the album written about the Tool Box Murderers. Corporate Death uses his breathy growls, giving the song more of a Macabre feel, but then a catchy Carnival melodied chorus is followed by brutal soloing. “The Murder Mack” follows this same pattern, but it never gets old. It’s both a sinister song yet it’s fun.

After some silence, you hear the same carnival music as you did in the intro, marking the end of the bloodiest carnival in the world. Macabre has remained legends for a reason. Not just because their legacy has lasted for 35 years, but because they consistently release morbid albums. They maintain their authentic sound and still find ways to progress. And when you’re in Macabre’s Carnival of Killers, there’s no begging for mercy. ~ Stephanie Jensen

JOHN 5 AND THE CREATURES: Invasion