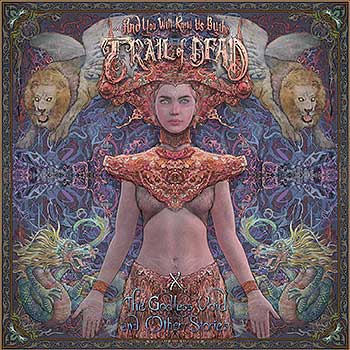 …AND YOU WILL KNOW US BY THE TRAIL OF DEAD
X: The Godless Void and Other Stories

PROGGY ARTSY INDIE ROCK: Austin, Texas’ …And You Will Know Us By the Trail of Dead has always shakily resolved to be that furious, Lollapalooza era alt-rock band with progressive tendencies, a foot rooted in melodic hardcore punk, and even a little of what the 90s successfully sold the masses as metal. And depending on which side of the divide you build your turret, this shapeshifting identity is either a good or not-so-good thing. Absolute brilliance has emerged from this collision. Their 1999 debut, Madonna, will always be held in high regard, even by those rare creatures who don’t automatically like a band’s old stuff better. And the band themselves have done more than a few tours acknowledging how Source Tags and Codes has been heralded as a masterpiece by lots of very “smrt and mprtnt” people—yours truly included. Even when they aren’t firing on all cylinders, which can happen when turnover plagues 50 percent of your lineup regularly enough and the writing core is spread out between Cambodia and Austin—good portions of releases like 2012’s Lost Songs and 2014’s IX still rattle the shutters with distinction and the knowledge that who you’re hearing is undoubtedly …Trail of Dead.

Album number 10 is among the band’s least direct work. In salutation of those ponderously self-referential prog albums that tie-dyed uncles and water bong spillers of generations ago would bake their brain cells to via sides A-through-D of intricate musicianship and astral-alien themes, X: The Godless Void and Other Stories makes repeated use of a strong, multi-referenced melody in the album’s intro, outro, and various points in between. The theme is built up on album opener, “The Opening Crescendo,” to mimic cinematic grandiosity—you can feel the chase scene tension and see American flags flapping in the breeze—before pulling its reins towards oversized sweatshirt guitar rock underscored by piano tinkling in “All Who Wander.” “Something Like This,” “Children of the Sky,” and “Gravity” all have a pastoral sense that plays conglomeration off sparseness a bit too much at times—too much thought, not enough rock, as it were.

This isn’t so much a criticism of the band’s ability to incorporate diversity, varying mood strains, and a dizzying dynamic swing, because the songs are not only distinctive and infectious, they also highlight Conrad Keely and Jason Reece’s ability to entwine counterpointing vocal phrases around all measure of straightforward and sidewinding riffology. However, when “Into the Godless Void” barrels out of the starting blocks with the same attention to convergence and divergence, but fucking rocks to the point we’re anointing it as one of the greatest songs of the band’s discography, one wishes they’d stir the pot and stop acting their age to further explore the more areas around the redline.

In other spots, they’re writing the licks and songs Weezer and Sonic Youth have been failing at since the 90s (“Don’t Look Down”) and making listeners wonder what classic Rush might have sounded like had they discovered downtuning (“Who Haunts the Haunter”). The album concludes on the steady upward trajectory of “Through the Sunlit Door” with dense instrumentation and references to the record’s beginning and a surprisingly abrupt ending.

All the elements that have made this band this band since their formation are present and in fine working order. Again, opinions on which …Trail of Dead this is and how it falls will be based as much on prog vs. rock opinions as impacted by something as fragile as what sort of mood the listener is in. If all else fails, or you’re stuck in decision making purgatory, throw on “Into the Godless Void.” It’s satisfaction guaranteed and a stone cold classic. ~ Kevin Stewart-Panko