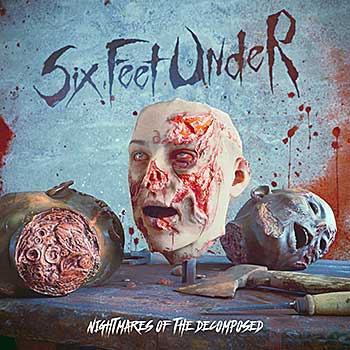 SIX FEET UNDER
Nightmares of the Decomposed

DISAPPOINTING DEATH METAL: Let’s get the “elephant in the room” out of the way right off the bat. Six Feet Under vocalist Chris Barnes’ voice is completely fried. From the first listen of the band’s 17th full-length album, Nightmares of the Decomposed, it’s obvious that his voice has seen better days. His legendary gutturals from his early days with death metal progenitors Cannibal Corpse have been replaced (on purpose or out of necessity?) with a noticeably strained, weathered, and quasi spoken word vocals accompanied by several excruciating pig squeals.

Album opener “Amputator” starts off promising enough with some speedy, old school death metal until those horrid, garbled vocals come in and you really can’t believe you’re listening to Chris Barnes. And that putrid pig squeal at the 3:18 mark, which also pops up again later in the album, is absolutely cringeworthy.

And it only gets worse from here. The horrendous lone vocals on the verses of the plodding, bland, and repetitive “Zodiac” are ear shattering bad. The putrid pig squeal returns at the beginning of “The Rotting,” which actually contains a killer, twisted melodic riff and a tasty guitar solo. As far as track five “Migraine” goes, after four previous songs of Barnes’ horrid vocals, you too will suffer a migraine. “The Noose” contains those same horrendous vocals and pig squeals on “Zodiac” and “The Rotting.”

On the plus side, one of the few highlights of this album is the reunion between ex-Cannibal Corpse members Barnes and guitarist Jack Owens, which makes this their first collaboration of new material since 1994’s The Bleeding. In addition, some of the guitar solos by Owens and Ray Suhy are magnificent, such as on opener “Amputator.” The rest of the guitar work is good, but the mixing job doesn’t do it justice. However, the bass work from Jeff Hughell is rather predominant throughout the album and is one of its brightest points, especially on the menacing “Blood of the Zombie” (one of the best tracks on the record) and “The Noose.” Some of the better tracks are placed at the back half of the record, such as the fierce riffs and powerful drum fills (courtesy of Marco Pitruzzella) on “Self Imposed Death Sentence” and the hooky chorus of “Dead Girls Don’t Scream.”

At 12 tracks with a 44 minute runtime, it’s just too much to take, especially when there’s so many slow burning and plodding, mid paced songs as there are on this album. Plus, the sound is inconsistent and its intensity is lost from time to time, proving to be an unbalanced mixing job. Honestly, how on earth Metal Blade Records and Barnes himself thought that this would be a good idea to release this album is beyond us. ~ Kelley Simms