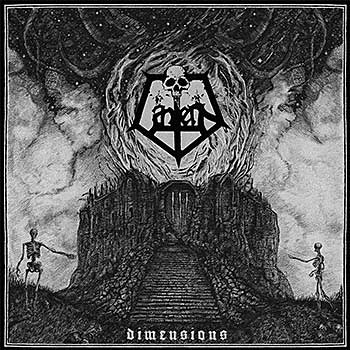 EPIC METAL OF DEATH: Until recently, your humble narrator wasn’t at all familiar with Finland’s Lantern, despite their 13 years of existence and the small pile of demo, EP, and full-length releases to their name. A quick scour around the interhole has turned up a common thread amongst those already and more familiar with the band—Dimensions is a vast leap forward when compared against previous works. Album number three takes advantage of a crisp and clean, yet still incisive and sinister, guitar sound to churn out riffs that straddle the unchecked divide between the final frontier and subterranean darkness. That Lantern thrives in the crossfire of Stanley Kubrick and H.P. Lovecraft is just the fancy way of saluting Dimensions’ strength and ability in combining death metal from both space and caves. Never mind the fantastic addition of melodic black metal and classic doom records on 45.

The victorious trick is that all this assortment and disparity is masterfully synthesized. Lantern’s dominant superpower is their ability to take whatever influences, inspirations, and sounds and puree them all so that the original output flows with ease, making for a release that covers all intellectual and musical markers. ~ Kevin Stewart-Panko