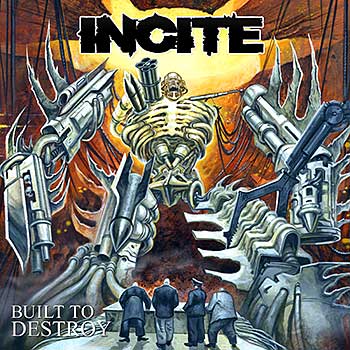 MODERN EXTREME METAL: Phoenix based Incite—led by frontman Richie Cavalera—have been proving themselves for 15 years now. Despite his surname, Richie is making a name for himself and has built Incite from the ground up. On its fifth full-length, Built to Destroy, Incite delivers 11 gritty, hardcore/groove metal tracks with thrash metal elements with the same ferocity as current NWOAHM bands such as DevilDriver, Lamb of God, and other bands of their ilk. On this release, Incite finally has a reliable lineup in drummer Lennon Lopez, bassist Christopher EL, and guitarist Dru Rome, making the band a tight-knit unit. The title track opener isn’t as explosive as the band’s previous album openers, but once those chugging grooves settle into your brain and the killer harmonized guitar melodies begin to soar, you know you’re strapped in for an extreme metal ride.

Lyrically, Cavalera draws inspiration from what’s fucked up in the world today through his eyes, most notably on “Human Cancer” and “Poisoned by Power.” Old friends Kirk Windstein of Crowbar guests on the former, while Chris Barnes of Six Feet Under lends his distinctive voice on the latter, which are probably the two best songs on the entire album. The band’s songwriting is even tighter this time around due to Rome taking over writing duties—thus, his killer guitar work is spread throughout the 37 plus minute album. The production is once again handled by Steve Evetts (The Dillinger Escape Plan, Hatebreed, Suicide Silence), but it seems a bit compressed compared to what he achieved on last album Oppression. Yet, it’s raw and gritty enough to be enjoyable. Also, Cavalera’s voice isn’t as pronounced or punchy and is somewhat muffled in the mix. Although Built to Destroy is ferocious in its own right, it lacks the addictive grooves, hooky riffs, and memorable choruses that their previous albums All Out War, Up in Hell, and Oppression possessed. It takes a few spins for some of the tracks to grow on you. However, Built to Destroy is an album worthy of the band’s back catalog. ~ Kelley Simms