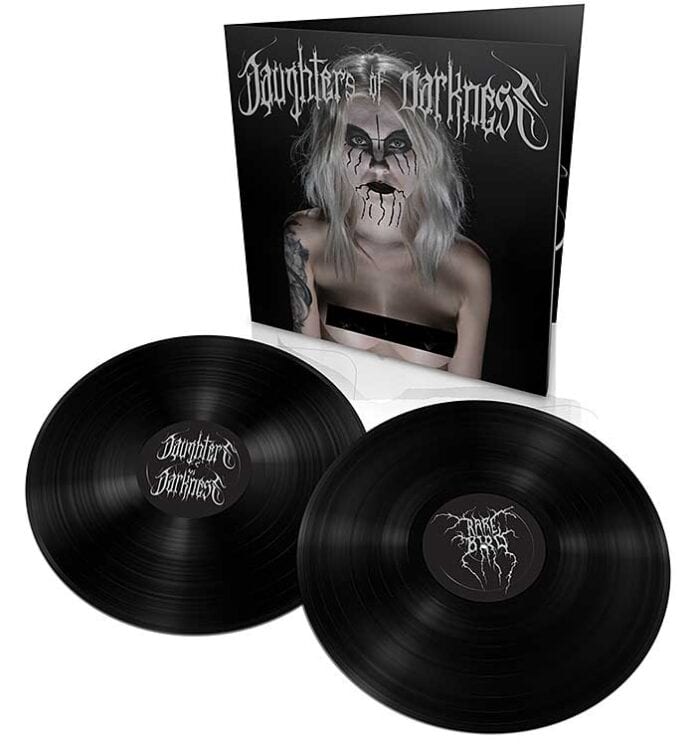 BLACK METAL COMPILATION: The cool thing about compilation albums is that it gives listeners new opportunities to hear different bands they may not be familiar with or may not have had the chance to check out before all in one shot. Plus, some compilations introduce particular themes or genres to new listeners, such as this all black metal soundtrack curated by professional music photographer Jeremy Saffer that accompanies his new massive photo book Daughters of Darkness, released on Devil’s Night via Rare Bird Books. Saffer was weaned on various black metal compilations such as Deathmeister, Gods of Darkness, Fire Starter and Crusade from the North, to name a few. To be able to curate his own compilation for his own photo project is a dream come true for Saffer.

Saffer has teamed up with record label Season of Mist for this 12 track compilation, featuring more than 60 minutes of music on limited edition gatefold double 45rpm vinyl. Season of Mist awarded Saffer the keys to their musical archives and allowed him to pick the bands and the songs that he wanted, which includes iconic black metal artists such as Abbath, Carpathian Forest, Rotting Christ, Watain, and more. The album serves as a free companion to the Daughters of Darkness Bathory, Bloody Bathory and boxed set editions of the book, and will not be available with the standard edition.

Opening track “Count the Dead” by ex-Immortal guitarist/vocalist Abbath is one of his best tracks from his 2016 self-titled debut solo album. The swagger of Immortal mixed with modern production values is the perfect blend for one of the most iconic artists of the black metal genre. Although Mayhem’s A Grand Declaration of War is a polarizing album to hardcore Mayhem fans, Saffer felt that the title track was essential as the Maniac-era of the band also has something special to offer to go along with the band’s early era material.

Watain’s “Sworn to the Dark” and Carpathian Forest’s “It’s Darker Than You Think” are two obvious choices to represent the genre, and they’re both well justified here. Rotting Christ’s “Heaven and Hell and Fire” represents the newest material of the Greek black metal titans from its latest album, 2019’s The Heretics, while Iceland’s Helfró, one of the most exciting newer black metal bands today, offer their latest track “Bratt Fyrir Brennandi Vilja” from its 2018 self-titled debut full-length album. Finland’s …And Oceans, who strayed a bit from their traditional black metal sound a few years ago, are now back with a new album, Cosmic World Mother, offering up “One of Light, One of Soil,” which best represents the new old-school black metal sound. Rounding out the rest of the record is Dutch symphonic black metal band Carach Angren, Gaahls WYRD, The Great Old Ones, Der Weg Einer Freiheit, and 1349.