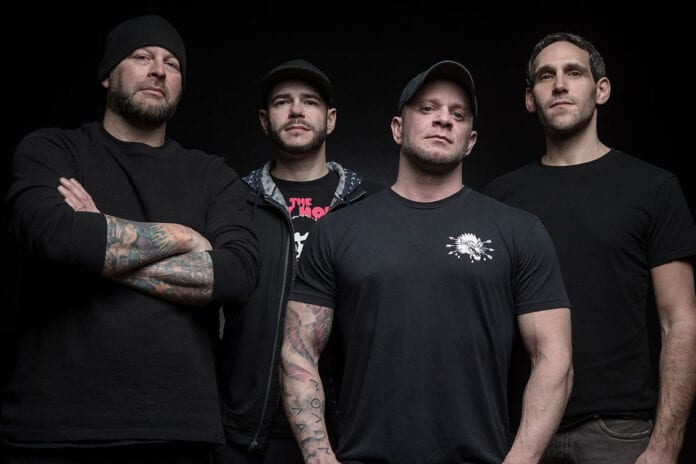 Perpetual Doom, a western Massachusetts metal staple, had called it a day in 2000. Phil Labonte went on to Shadows Fall and then All That Remains, Ken Robert and William Brault to Split Shift, and Steve Gonsalves went on to star on TV’s Ghost Hunters and then Ghost Nation. 20 years later, the band is back and ready to revisit their death metal past.

Ken states, “We had tossed around the idea of reuniting or possibly redoing some of the old songs from our first demo, but never could get everyone together to make it happen until now. It seemed only fitting for us to go back and reconstruct what was one of our “essential songs,” which is why we choose “Apt. 213” as a jumping off point to see what a modern version of Perpetual Doom would sound like. The original incarnation of the song was a bit immature and somewhat outdated so we wanted to approach it as a re-imagining. ‘I wonder what this song would sound like with a bunch of unnecessary riffs cut out and completely overhauled in a modern way?’ So, some parts were moved around and I completely overhauled the lyrics to convey what I believe may have gone on in the psyche of Jeffrey Dahmer while he committed unspeakable acts. This is my interpretation of what I imagine someone of his nature might have mentally gone through.”

Steve, on the rewrite of the song, says, “It has been a lot of fun reimagining the structure and direction of these songs to bring them to a modern landscape but still preserving their original death metal roots. We were just writing about stuff we were into—horror movies, true crime, world views, and macabre history. With the first track, “Apt. 213,” it’s about the serial killer Jeffrey Dahmer and his state of mental health. It isn’t glorifying his acts but quite the opposite. What we found intriguing was the state of mind someone like that must be in. It’s more like a historical account of a serial killer with a brutal soundtrack.”

On the history of the song, Ken says, “The song ‘Apt. 213’ was originally written back in 1993 and was one of our first songs that set the tone for the band’s sound and direction. It was inspired by the fascination everyone had for Jeffrey Dahmer at that time. He was in headlines for years, and his macabre killings affected so many of us that it was almost impossible not think about. Our original singer at that time, Scott Estes, came up with the idea to write lyrics about what may have gone on where Jeffrey committed some of these atrocities, inside apt 213. Then we added the crushing riff you hear at the beginning of the song, and Steve added this little jazzy type bell on the ride and it all came together from there. Soon after, Scott had left the band, and Phil and I started doing vocals together and essentially trading off with one another. That sound became somewhat the foundation of what Perpetual Doom was to be for years to come. The process of recording new Perpetual Doom songs has been a welcomed challenge, and we are thrilled to share our progress and passion with everyone as we continue to put new material out.”

Apartment 213 pre-production was done with Jim Fogerty, mixed by Joel Bousquet and mastered by Zuess.

PERPETUAL DOOM is a heavy melodic death metal band hailing from western MA and was formed in 1993 and played for many years all through the 1990s until about 2000 when the guys all prospered in different directions, as Ken and Bill got singed to Electra/No Name records with their band SPLIT SHIFT, Phil started his renowned band ALL THAT REMAINS, and Steve went on to have a prosperous career on the television show GHOST HUNTERS. The guys have all rejoined one another to bring us a new PERPETUAL DOOM born from the ashes of 2020.