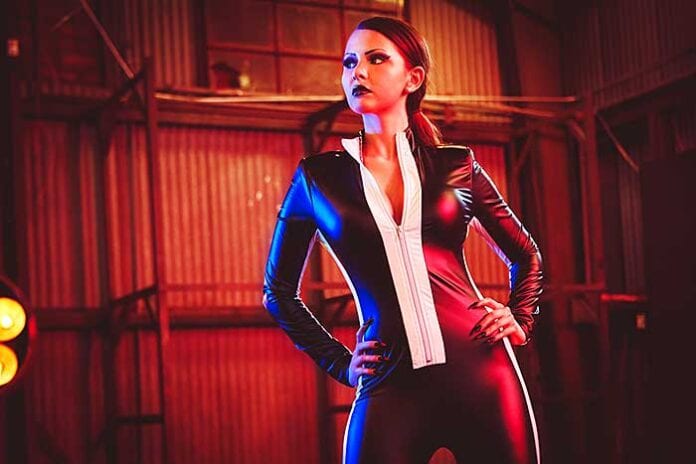 WATCH THE EXCLUSIVE PREMIERE OF BELLA KELLY’S NEW VIDEO “THROAT” ONLY ON OUTBURN.COM

BELLA KELLY is acutely aware of the powerful, lifesaving potential of the creative arts. She has firsthand experience, because music saved her life, too, and it’s a gift she hopes to pass on. The video for “Throat” was directed by Vicente Cordero (3Teeth, Skold, Julien-K) along with SFX by Laney Chantel.

Conjuring strength and resilience from the depths of anxiety, depression, and despair, the enchanting and adroit young singer-songwriter makes music for the melancholy, the outcast. The disenfranchised and pushed-aside are all welcome within the fascinating world building of her haunting and immersive songs. Each composition is a distinctive clarion call to self-acceptance and empowerment. A small child who was “othered,” unequipped to connect and make friends, robbed of innocence, BELLA used her rich imagination to make an emotional escape through song.

Her music is at once grand and cinematic in scale and yet equally intimate, with stark vulnerability.

Songs like the mesmerizing slow burn “Heartbreak Motel” and the invigorating gothic-trap anthem “Throat” resonates with outsiders because BELLA casts her lot with them, alone with the alone. “Goodbye” is alarming in its naked intensity, its stark emotional honesty, an alluring tug at the soul. She paints sonic pictures of smoky greys and ghostly whites, cloaked in protective darkness.

BELLA’s life began with a triumph over adversity almost supernatural in scale. A heart condition nearly took her from this world just as soon as she’d arrived, her tiny body robbed of its heartbeat several times just a few days after her birth. She was born in Brunswick, Georgia, a small town anchored by the Victorian era Old Town District and its massive 900 year old Lover’s Oaktree.

From the age of six, she penned short stories and songs, to replace the demons of isolation and sadness as her childhood companions. A talent agent cast her in a television commercial when she was nine, which began a four year detour into short films, series, and feature length movies. Film and TV remain essential to her, from vintage horror to classic cerebral anthologies. But music is BELLA’s true calling, from the healing magic it works in her own life to the way it affects others.

At one of the lowest emotional points for her personally, as a young adult, the dark fire and churning sentiment under her surface were recognized by David Gnozzi, the Italian born producer and YouTube star. Well versed in everything from pulsating electronic-driven music to rock and hip-hop, Gnozzi began a creative partnership with BELLA that was nothing less than revelatory. Over two years, BELLA sharpened her sound and musical identity, with David producing, resulting in more than 30 songs and fully realized narrative visions for music videos and related imagery.

Like the greatest of vocal-driven indie pop, gothic folk, chillwave, and balladeering, BELLA KELLY’s music offers safe passage from the real horrors of modern everyday life. Get lost and immersed in narrative soundscapes that give rise to evocative phantoms and specters, beckoning those who’ve struggled with anxiety, depression, or hardships. Journey inside and join the BELLA KELLY family.