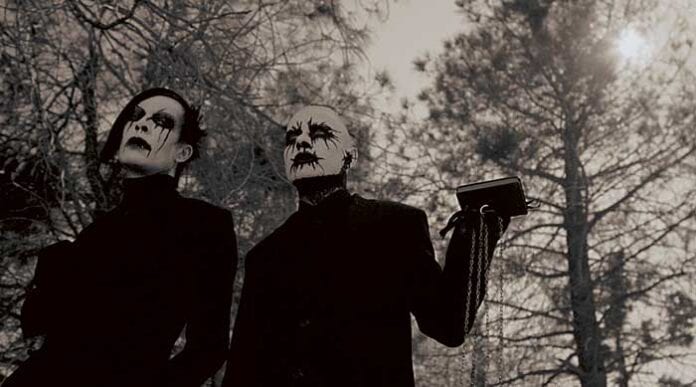 When word got out that two leading figures in industrial music—Tim Skold, formerly of Marilyn Manson as well as his namesake project Skold, and Nero Bellum of Psyclon Nine—were teaming up for a new project dubbed Not My God, expectations seemed impossibly high. And yet somehow this industrial duo exceeded them all. From the release of the first single “Fiction” in January of this year, which was accompanied by a stellar video that has earned 350k streams and counting, to the album release the following month, Not My God quite obviously struck a vibrant, pulsating nerve in dark electronic fans around the globe. And now the pair have returned with another beautifully nightmare inducing video that finds them reuniting with “Fiction” director Vicente Cordero of Industrialism Films.

Following hot on the heels of the wildly popular “Fiction,” the video for “Sowing Discord” is another breathtaking, full-scale production that brings out Not My God’s dark theatricality. The narrative captures both Skold and Bellum (in full makeup) alongside actors on the set in a natural wooded landscape with haunted shadows and knotted branches that both contrast and intertwine with the twisted wires of the band’s modern gear. The video evokes the naturalistic horror of films such as The VVitch and Midsommer and transforms the song’s gently grinding pace into a relentless creep as compelling as it is disturbing.

Nero Bellum has this to say about the video, “In ‘Sowing Discord,’ we are the spectators of the eventuality of all organic processes: the finality of life.”

Not My God (the album) is available now on digital platforms everywhere as well as on digipak CD and a very limited (only 300 made) 2LP clear vinyl pressing via Cleopatra Records.