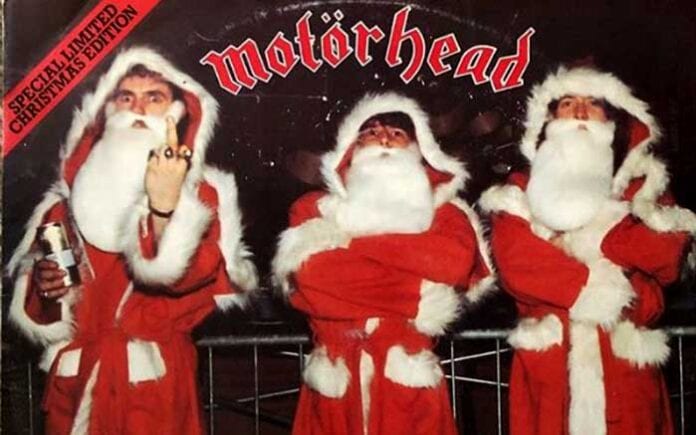 There’s perhaps no contrast as stark as that of the jolly spirit of Christmas versus the dark underbelly of heavy metal. And yet, despite the apparent antithesis, metal has embraced the holiday far and wide. Bands like Every Time I Die and The Black Dahlia Murder perform annual Christmas concerts. Halford, Twisted Sister, August Burns Red, and so many others have dropped full on albums dedicated to the yuletide. And, of course, we are not by any means lacking hard and heavy Christmas tunes for our seasonal playlists.

Whether it be covering a winter classic or inventing a new ode to the holidays, here is a list of 11 of the heaviest holiday jams to spice up your Xmas this year!

Halestorm’s version of this AC/DC song is just as faithful to the original as it is fresh. While the band doesn’t make many changes to the composition of this classic, their vibrant energy makes this version feel full and crisp. And Lzzy Hale absolutely nails the vocals!

When Savatage released the Dead Winter Dead album in 1995, they had a very surprising radio hit with this Christmas medley, which is comprised of “God Rest Ye Merry Gentleman” and “Carol of the Bells.” The unexpected commercial success of this single inspired the band to change the trajectory of their career. And thus, The Trans-Siberian Orchestra was born… the rest is history!

3. KING DIAMOND “No Presents for Christmas”

Every headbanger knows this is a MUST on their yuletide playlists to ensure a heavy holiday! The lyrics to this song are also out of character for the king, and very amusing. With plenty of maniacal laughing and lines like, “Tom and Jerry drinking sherry, they don’t give a damn,” what’s not to love?

We Wish You a Metal Christmas and a Headbanging New Year is an epic sampling of Christmas songs from a wealth of notable collaborators. Among the tracks, three of rock’s most legendary musicians team up to do a bitchin’ cover of this iconic Chuck Berry tune. Without question, this is one of the most exciting cuts from this compilation.

While some know this time of year to be bright and cheerful, the holidays can be a very depressing time for many. Leave it to Type O Negative to capture the darkness that often times shrouds what should be a joyful time of year. A stark combination of somber organs, slow passages, and mournful lyrics make this among one of the Brooklyn band’s darkest songs, but also, one of their greatest.

The Nightmare Revisited compilation is a fascinating take on the soundtrack for Tim Burton’s classic film, The Nightmare Before Christmas. Rock, punk, metal, and even flamenco guitars, all reimagine these classic show tunes. There are some hits and misses in the mix, and Korn’s version of “Kidnap the Sandy Claws” certainly falls into the former category as one of the most standout tracks on this offering.

Manowar takes this quaint non-secular Christmas classic and turns it into an explosive epic. In spite of the lyrics, it still sounds very much like a heroic victory tune that plays as warriors enter Valhalla upon a noble death.

The scumdogs really bring the party and all of the sleaze with this festive single about making it rain in a strip club on Christmas Eve.

There are plenty of great djenty Christmas takes on August Burns Red Presents: Sleddin’ Hill, A Holiday Album, but this is among the most fascinating, as it was reported in 2017 that this song was actually being played in Disneyland theme parks, of all places. Yes, the place known for banning dozens of metal bands is actually ripping this through their speakers during the holidays!

The iconic Judas Priest singer gets festive on his third studio album, aptly titled Halford III: Winter Songs. Among a smattering of re-imagined Christmas classics are a handful of Christmas originals, including this rockin’ cut that beckons the listener to, well, “get into the spirit!”

Much like King Diamond’s Christmas contribution, Venom’s “Black Xmas” is raw, gritty, and one of the heaviest holiday offerings to date! Of course, the first wave of black metal legends use this as an opportunity to blaspheme one of the highest holy days in Christianity. And it rips!