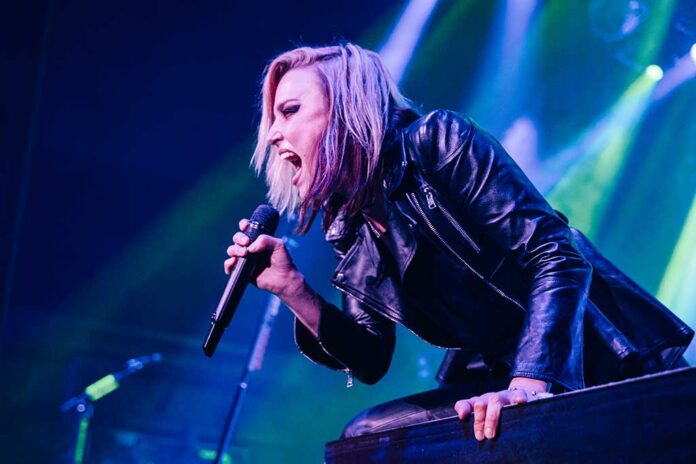 Halestorm, The Warning, and New Years Day hit the road on September 21st, 2022 starting at Mars Music Hall in Huntsville, AL. New Year’s Day didn’t make it due to mechanical problems with their tour bus, but on September, 26th all three bands brought their A game.

Showing up to the venue early, there were already fans in line three hours before the doors opened. The Eastern is a 2,400 capacity venue and it was packed out by show time. At 7 p.m. sharp the lights turned off and out walked the members of New Years Day one by one, ending with frontwoman Ash Costello taking the stage, and the band hooked and reeled the audience in from the first note they played. Guitarists Nikki Misery and Jeremy Valentine ripped through every song, as the rhythm section of Brandon Wolfe on bass and drummer Tommy Rockoff brought the tempo and low-end groove.

All these sounds swirled around as Ash Costello belted out note after note, pulling the audience in closer and closer with each song. Costello commanded the stage as the band moved around her as if they were caught up in the trance of her voice. 40 minutes had flown by, and as quickly as they took the stage, they were gone.

Up next was Mexican rock power trio The Warning. At 8 p.m. the Villarreal Velez sisters took the stage. The Warning had a big, full sound achieved as a three piece. They started the set with “Dust to Dust.” The song began with an excellent bass groove from Ale and drummer Pau on lead vocals while keeping the tempo with a driving beat and drum fills throughout the song. As they kept the rhythm and tempo, guitarist Dany danced around the fret board and traded off lead vocals with her sister for the remainder of the set.

They ran through the songs “Z,” “Queen of the Murder Scene,” “Choke,” and “Money.” With each passing song the crowd got louder and louder. The sisters then played their rendition of Metallica’s “Enter Sandman,” and the audience went nuts. They ended the set with “Error,” “Disciple,” and the uptempo guitar chugging fan favorite “Evolve.” The Warning didn’t just warm up the crowd, they lit them on fire.

Usually, the crowd settles down between each set, but the excitement was overwhelmingly present, and at 9:10 p.m. the headliners Halestorm took the stage. They started the set off with “Rock Show,” which was fitting because that was exactly what the fans came to see. They followed with “I Like It Heavy” and “Familiar Taste of Poison.” Frontwoman Lzzy Hale held on to her mic and walked around the stage, amping up the crowd with every note she belted out.

Lzzy then grabbed her signature Gibson guitar and started picking out the song “Amen.” The first four songs felt like an appetizer, because when the fifth song “Freak Like Me” hit, the main course had arrived. Drummer Arejay Hale and bassist Josh Smith laid down the beat and low-end, while guitarist Joe Hottinger brought his trademark guitar groove—all of this in unison as the crowd hung on to every word that left Lzzy’s lips. The band blasted through the next several songs, including favorites “Wicked Ways,” “Lover Bites,” and “Strange Girl.”

Lzzy gave us a pallet cleanser, showing off her piano skills before the band went full throttle into its most popular song, “I Miss the Misery,” which ended with a booming drum solo by Arejay. They ended the set with the first single off their newest album Back from the Dead, followed by “I Get Off” and “I Am the Fire.”

Halestorm left the stage, but the crowd wasn’t having any of that and immediately started chanting for an encore. The two Hale’s, Smith, and Hottinger weren’t gone for long before they came back on stage with cups in hand, made a toast to the audience, and then started playing the catchy “Here’s to Us.” They then closed out the night with the hard-hitting “The Steeple,” and it’s clear by the lyrics, “This is our church you are my people” that Hale was born to be a rockstar. As the song ended, Arejay jumped off his drum riser with sticks in hand to give out to the fans, with several hundred arms in the air hoping to catch one of his mallets. Hottinger and Smith flicked their picks across the venue, as Lzzy handed out roses and autographed signs being held up by their adoring fans.