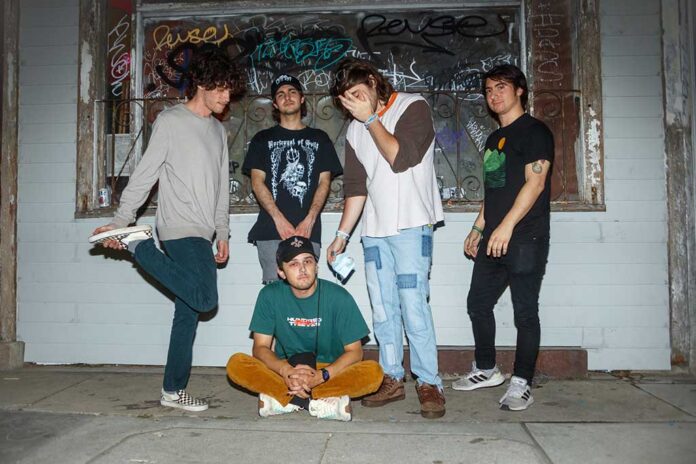 WATCH HEY THANKS!’ NEW VIDEO FOR ”I’M SURE IT’S ON THE WAY” ONLY ON OUTBURN.COM

Writing songs that draw from their wide range of influences, including emo, punk, electronica, and indie-pop, Hey Thanks! captures the essence of indie pop music. The band has spent the better part of two years writing and recording their debut full-length, Start/Living, to be released on Iodine Records. Pre-order it here.

About “I’m Sure It’s on the Way,” vocalist Travis Opal says:
”This song was written in early 2020 and was originally going to be an idea for something different since at the time, Hey Thanks! itself was having some confusion on what sort of sound we wanted. When Gary Cioni first heard the demo he immediately said, ‘We have to track this song.’ The song was written about the internal battle a person faces with themselves when it comes to taking big chances on doing life changing events. Not letting friends or family stop your pursuit, a constant battle of you fighting with yourself over what’s right. A split ideology so to speak.”

Q&A with Travis Opal of Hey Thanks!

What’s one thing people might be surprised to know about your band?
While this isn’t really a surprise if you know, the band name originally comes from b side song by the wonder years, even though most of us aren’t the most active pop punk listeners. I think people would be surprised to learn about us is how different all of our music tastes are. All of us are able to bring our own unique elements to the band when writing and it helps us in our goal of not letting HT! be defined by the confines of any specific genre. We’ll always play around with different sounds and styles to hopefully make something special.

What’s one thing people might be surprised to know about you as a person?
Not only do I love playing in a band, but I’m very much into producing and mixing songs, and I’m also into to playing pretty much any instrument I can get my hands on.

Best thing about being from NOLA?
Besides the cool architecture and food scene, it’s really reaffirming when your drinking and you don’t have to consciously think about having a drink outside since it’s legal. There is a small scene here that is really thriving, even though most touring bands skip over the area going from Florida to Texas. We feel lucky to be a big part of the growing scene and hope we can help put it back on the map.

Which song on your record should music fans listen to first and why?
I think you should first check out “I’m Sure It’s on the Way.” And wow, would you look at that? You conveniently can watch the music video for this song premiering right here! It’s a great first listen because I think it’s the perfect song to shatter expectations of what you may think we are as a band. Our whole goal with writing this record was to not let the idea of what a Hey Thanks! song is supposed to sound like hold us back from writing what felt right.

What’s next for Hey Thanks!?
First thing up is touring! We are about to hit the road for a full East Coast run and also playing both Less Fest in Chicago as well as The Fest 20 in Gainesville, FL this October.