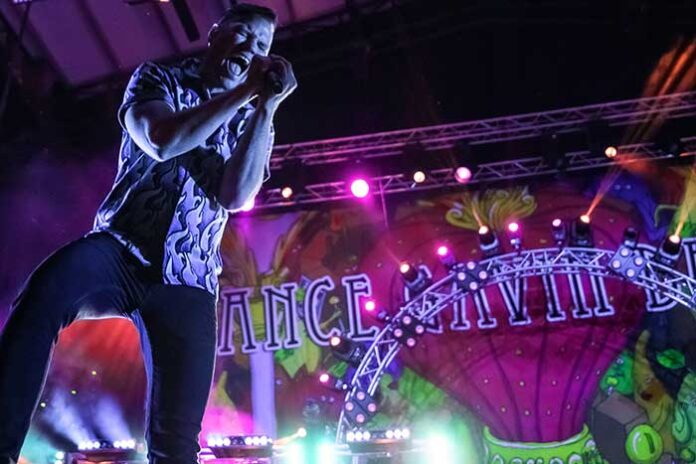 On April 23, 2022, Sacramento’s own Dance Gavin Dance hosted Swanfest, a single day event at Heart Health Park. Fans were so happy to finally see this highly anticipated show, which had been postponed due to the COVID-19 pandemic. Just a few days prior to the festival, Dance Gavin Dance announced that their longtime bass player, Tim Feerick, had suddenly passed away, and there was a lot of unknown questions leading up the event, with many people unsure if the show would even happen. Eventually, the band did announce its decision to perform and continue on with upcoming tours.

This year’s edition of Swanfest featured a great lineup, taking place over two stages. The side stage played host to bands like Moon Tooth, Seeyouspacecowboy, Covet, Hail the Sun, and The Fall of Troy, while the main stage brought out acts like Kublai Khan TX, Veil of Maya, Anthony Green, Knocked Loose, and Animals as Leaders.

Seeyouspacecowboy was an impressive act on the side stage that was reminiscent of early screamo bands like Drop Dead, Gorgeous.

Another standout act from this show was Hail the Sun. It was great to see their lead vocalist, Donovan Melero, front and center. The band was full of energy, with Donovan swinging the mic over his head and jumping into the crowd at one point towards the beginning of the show.

One of the biggest standouts from the day’s festivities was the return of the original lineup of A Skylit Drive. This reunion featured the band’s original singer, Jordan Blake, performing with the Lodi, CA based post-hardcore act for the first time in nearly 15 years. Most fans in the crowd probably never had the opportunity to see the band perform with Jordan, and for those longtime fans, it was a special experience. They had a fantastic set, picking up right where they left off.

On the main stage, after a morning filled with heavier acts like Born of Osiris, Kublai Khan, Volumes, and Fire From The Gods, things slowed down a little bit with Anthony Green, the powerhouse vocalist of bands like Circa Survive and Saosin. Towards the end of his set, Green had Kurt Travis of Royal Coda and Donovan Melero of Hail the Sun join him for a performance of his classic song, “Seven Years.”

Another great main stage act was Volumes, who brought forth an incredible live show that had the fans in the pit going crazy. The energy between vocalists Myke Terry and Michael Barr was excellent, with the fans feeding off their intensity and giving it back tenfold. Throughout their performance, fans were crowd surfing, moshing, and screaming the words right back at them.

The crowd for Knocked Loose went crazier for them than any other band prior in the day. The fans were crowd surfing nonstop during the band’s set, as Knocked Loose played their way through a heavy hitting set list. Although their performance was towards the end of the night, there was no sense of slowing down from the band or from the audience.

There were two other special moments that captured my attention throughout the show. First, Donovan Melero returned to the stage to perform a song with the closing act on the side stage, The Fall of Troy, with both the band and guest vocalist delivering a great performance. Second, the festival’s main support act, Animals As Leaders, dedicated a song to former Volumes member Diego Farias, who unfortunately passed away in 2020.

As the night started to slow down, the mood changed from excitement to heavy emotion. It was a positive atmosphere, but you could feel a sense of weight from the fans as Dance Gavin Dance’s set was approaching. In the downtime between acts, fans of the day’s headliner were visiting the various memorial sites that were put in place to honor the late Tim Feerick. There was a photo of Feerick that greeted you as you entered the festival grounds, as well as various album covers placed throughout the field from the band’s catalog, all of which featured the albums that Feerick performed on throughout the band’s career.

There was a bit of delay between set times, so while scheduled to go on at 9:30 PM, Dance Gavin Dance took the stage a little closer to 10:00 PM. On the schedule for the day, the band’s set time was listed as “9:30 to ???,” which meant they could determine in that moment how many songs they would play, and how many they could handle performing given the levity of the situation. Performing in Feerick’s place was close friend of the band, Sergio Medina, who did an incredible job not only playing bass in Dance Gavin Dance, but helming guitar duties in two other bands throughout the day—Royal Coda and Eidola. Medina was able to play three different sets with a superhuman amount of energy, but he wasn’t the only member of Dance Gavin Dance that played at various times throughout the day, with guitarist Andrew Wells also performing in Eidola and guitarist Will Swan playing with Royal Coda.

Dance Gavin Dance opened up the show with the live debut of the band’s new song “Synergy,” from their forthcoming album Jackpot Juicer. They performed fan favorite songs, like “Uneasy Hearts Weigh the Most,” “Head Hunter,” “Suspended in Disaster,” and “We Own the Night.” Halfway through their set, the Jackpot Juicer banner behind the stage was dropped to reveal a banner of the band’s late bassist. While the crowd was energetic and singing along throughout the entire set, there was a level of sadness that could be felt in the air.

At the end of the day, it was an amazing festival with great performances all around. Everyone was incredibly appreciative of the fact that Dance Gavin Dance decided to stick with the show while paying tribute to Tim. This year’s Swanfest was really important in the scope of Dance Gavin Dance, and you could sense that throughout the day. This band is so incredibly supported in their hometown of Sacramento, and it was incredible to see that support up close and in person.