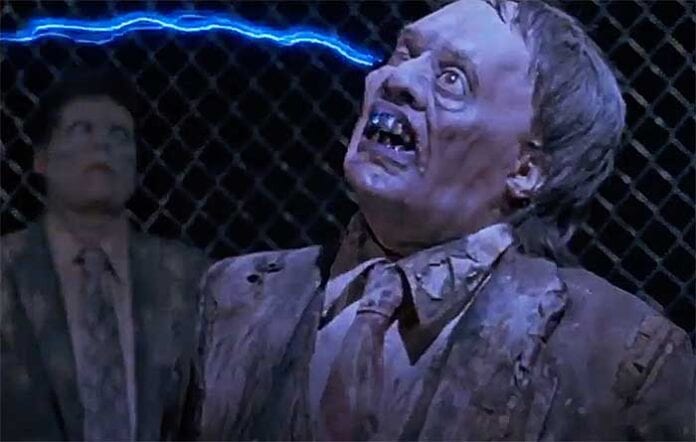 Halloween playlists—we know them, we love them, and we all want to put our own personal spins on the classics. I mean, how often do we really need to hear “Thriller” or “Ghostbusters” this holiday season? There has to be room for something a little different, so this year Outburn is submitting our picks for a heavy metal Halloween playlist of tunes. This isn’t in any way definitive, and we tried to keep it relatively band based, because we’d likely be here all day if we were going to kick out our favorite movie score jams. Halloween get-togethers may look, well, a bit different this year, but that doesn’t mean we all can’t kick it with a few choice cuts of heavy metal horror and soundtrack scares.

We kick things off with a proto-death metal banger from the mighty Possessed. Sure, “The Exorcist” may begin humbly enough with that haunting Mike Oldfield melody from the William Freidkin classic, but it isn’t long before Possessed erupts into a thrashing whirlwind of chaotic riffs, skittering drumming, and guttural vocals. If you want to kick off a Halloween playlist with style, why not try this one on for size? It’ll at least show that you mean some serious business this All Hallows’ Eve.

What’s a good death/thrash track without some punk rock to balance it all out? 45 Grave was one of the pioneers of death rock, a subgenre that was equal parts gothic imagery and punk aggression, and they made their mark with this all-time undead anthem, from the Return of the Living Dead soundtrack. This original soundtrack is actually chock full of bangers from the likes of T.S.O.L and Roky Erickson, but “Partytime (Zombie Version)” is probably the best remembered track of the bunch, an updated recording of the original track that appeared on the band’s Sleep in Safety LP. The lyrics here are changed fairly drastically to reference the fast and loose feeling of Return of the Living Dead and fit in perfectly with that film’s rebellious spirit and attitude.

Short and sweet, this one, but what Halloween playlist would be complete without this little ode to the Man of Your Dreams, Freddy Krueger? S.O.D.’s Speak English or Die is an absolute crossover thrash classic, full of anti-P.C. attitude and mosh riffs that are heavy enough to wake the dead. “Freddy Krueger” earns a spot on this playlist just for the breakdown alone, but don’t put away those dancing shoes just yet, because…

…it’s Bad Brains time, baby! Why not keep that adrenaline pumping for this next track, a classic gem of hardcore punk that’s barely over a minute long, but makes every second count. This may be Halloween appropriate in name only—it shares its title with the 1967 Roman Polanski and Sharon Tate flick of the same name—but who cares? Any time is a good time to listen to these hardcore pioneers.

Let’s slow things down a bit with this midpaced Motörhead banger that was a single from the band’s 1992 album, March or Die. Many are quite aware that the song was co-written by Lemmy and Ozzy for the latter’s No More Tears album, but Motörhead’s version ties more closely with the film series, as the accompanying video features tons of imagery to bring it all together for spooky season. What can we say? The song just has a great groove, no matter which version you play, and fits the Halloween season like a hand in a puzzle box.

“Alone in the Night”
LEATHERWOLF

We return to the land of the dead for our next double feature, specifically the soundtrack to Return of the Living Dead Part II. Whereas the first film relied heavy on a punk rock vibe, the sequel leaned more towards a metal, rock, and pop soundtrack. This fit better with the film’s lighter and more comedic tone, but don’t sleep on this original soundtrack for a second, because there are some serious gems to be unearthed. For starters, Leatherwolf’s “Alone in the Night” is an awesome melodic metal gem from one of the 80s most underrated acts, but it’s the Joe Lamont track “Flesh to Flesh” that may serve as the soundtrack’s true secret weapon. It’s a picture perfect slice of AOR pop/rock that plays over the film’s ending credits, with a chorus to die for and melodies that stick in your head for days.

Friday the 13th Part VI: Jason Lives is a fan favorite entry in the slasher series, a great combination of self-aware gags and genuine thrills that still work wonderfully today. This is another “end credits” track taken from Alice Cooper’s prime heavy metal period during the mid 80s. The Constrictor and Raise Your Fist and Yell albums were the younger, dumber cousins of the more polished Trash and Hey Stoopid LPs, but both still contain plenty of high points from the pioneering shock rocker. “He’s Back (Man Behind the Mask)” hangs its hat primarily on its synth sound, but that doesn’t make it any less fitting for a slot in any self-respecting Halloween playlist. Kane Roberts even manages to sneak in a subtle guitar solo before Alice’s ode to Jason Voorhees is finished.

“Dream Warriors”
DOKKEN
Back for the Attack (1987)

Okay, so at this point we’re firmly entrenched in the 1980s, so buckle up, because we’re gonna be here a while. No Halloween playlist would be complete without Dokken’s solid gold classic “Dream Warriors.” The track is the official anthem of the third film in the A Nightmare on Elm Street franchise, an entry many fans point to as their absolute favorite. It’s hard to argue with that point, too, and “Dream Warriors” is forever linked with that sequel’s success. The song also appears on Dokken’s Back for the Attack LP from 1987, and is a perfect storm of George Lynch’s fiery axemanship, a rock solid rhythm section, and Don Dokken’s smooth as silk vocals.

The next soundtrack on our list can be difficult to find, but it’s worth hunting down, if only for this super gem of a title track. The Dudes of Wrath was a super group put together on this compilation for Wes Craven’s underrated film Shocker from 1989, and featured Paul Stanley of KISS, Tommy Lee, Desmond Child, Vivian Campbell of Dio, Guy Mann-Dude, and Quiet Riot bassist Rudy Sarzo. “Shocker” is a quirky track. For starters, it’s one of the rare times we get to hear Stanley sing about some darker subject matter away from the sex and rock ‘n’ roll nature of KISS, yet the song ends on a weirdly positive note, never return to the “lambs to the slaughter” lyric of the chorus. Just listen for yourself, it’s an oddball banger from an oddball film, but definitely worth some investigation!

The Dickies are a well-respected punk band that displayed their unique and quirky charms to horror fans everywhere when they were tasked with penning this awesome theme to 1988’s superb Killer Klowns from Outer Space. The song is just a blast from first note to last, taking some classic carnival themes while never losing sight of the band’s melodic punk roots. The guitar rips, the lyrics are clever, and the melody is, for lack of a better word, KILLER. Call this one an earworm that you’ll want burrowing into your brain for a long time.

Okay, it’s time to flash forward just a little bit to Iron Maiden’s triumphant millennial return with the Brave New World album and it’s instant classic of a single, “The Wicker Man.” The song was inspired by the 1973 film of the same name, a classic of the folk horror genre that you absolutely MUST check out if you haven’t by now. Furthermore, the song itself is so tightly composed, so immediately anthemic and memorable that it could easily be in the conversation for one of the band’s all-time best. It’s literally THAT good. Check out the alternate version of the song for some bitchin’ Bruce backing vocals, too.

Call this one a personal favorite. I absolutely LOVED Lizzy Borden as a kid, and they’re still one of my favorite bands today. “Red Rum” is obviously inspired by Stanley Kubrick’s cinematic adaptation of Stephen King’s classic novel The Shining, and let’s it rip with Lizzy’s unique melding of shock rock theatrics, melodic 80s metal, and traditional moves. The band always possessed plenty of guitar chops—one time guitarist Joe Holmes would eventually go on to join Ozzy’s band—but it’s really set on display here, with plenty of urgency and aggressive double bass drumming to bring it all home.

Keeping it a little obscure here, this time with the American melodic metallers in Obsession and their track “Desperate to Survive.” Obsession was basically the unofficial house band of the Sleepaway Camp sequels, offering a number of tracks for the series’ soundtrack, with this one being a particular highlight. “Desperate to Survive” is taken from the second film in the franchise, subtitled Unhappy Campers, and is a nice heavy power ballad to cool things down as we near the finale of our playlist. Vocalist Mike Vescera in particular steals the show here, it’s easily to understand why the man was in such demand, singing for bands as varied as Loudness and Yngwie Malmsteen over the course of his impressive career.

Blackie Lawless and W.A.S.P. is another metal band with multiple appearances within the horror genre, offering up songs for The Dungeonmaster as well as this superior sequel to the original Ghoulies film. Although Ghoulies II has never seen an official soundtrack release, a studio cut of “Scream Until You Like It” appeared on W.A.S.P.’s 1987 album Live…in the Raw, and is well worth checking out. Actually, most all of W.A.S.P.’s records are worth checking out, actually. Seriously, W.A.S.P. fucking rules.

What Halloween playlist would be complete without this classic and spooky Ramones jammer? “Pet Sematary” just drives home what many Ramones fans had known for years, that the band possessed plenty of other influences outside of their punk rock roots. Bubblegum music, classic rock ‘n’ roll, and pop all went into crafting that often imitated, never duplicated Ramones sound, and that’s distilled perfectly here with “Pet Sematary.” Joey’s weird lyrics and almost plaintive delivery meld with Johnny’s riffage, while the creepy keyboards accent things with a haunting edge that’s just perfect.

“Theme from The Burning”
RICK WAKEMAN
The Burning (1981)

We leave you here with one final, atmospheric slice of soundtrack goodness, an instrumental ode to Cropsy, taken from the underrated 1981 slasher, The Burning. Yes keyboardist Rick Wakeman composed the music here, and it’s a weird but awesome mixture of scary/funky horror melodies together with the progressive rock for which Wakeman was known. Rick did soundtracks for a number of other flicks throughout his career, but it’s his work on The Burning that’s arguably served as his most definitive work as a film composer. It’s also a fun entry point into wild world of movie music in general, a subject we’ll hopefully cover here next time for a proper Halloween horror score playlist.

In the meantime, hope you enjoyed taking this haunted Halloween trip with us. Stay safe, stay weird, and stay spooky. Happy Halloween!