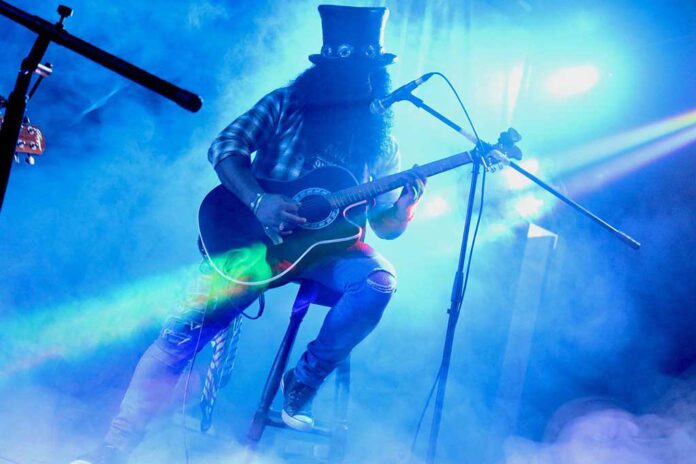 The iconic LA rock band Guns N’ Roses has been part of American culture since they were formed in the 1980s. Their energizing heavy rock exhilarated crowds as they rose to fame in the 80s and 90s. In fact, Guns N’ Roses sold more than 100 million records worldwide, which makes them one of the world’s most distinguished bands in history. But with the quick rise to fame, came their rapid downfall.

In 1996, lead singer Axl Rose and lead guitarist Slash disagreed over the direction of the band, and resulted in Slash leaving the group. The following year, Matt Sorum was fired and bassist Duff McKagan quit. The once iconic band that led a genre of music to new heights was torn apart and talked about for years to come. The Guns N’ Roses band set the perfect example of how rock ’n’ roll can lead to fame and glory, but can also be quickly annihilated without proper guidance and management.

To the surprise of many, the legendary LA rock band is back and touring the world. In fact, they’re now touring with sold out tickets and they seem as popular as ever, which is impressive considering they haven’t had a US Billboard Top Ten hit since the 1992 hit single “November Rain.” The rise back to fame has been made possible through their depiction in digital media, as well as being featured in films, like Terminator 2 and Step Brothers, and even games like pinball games for entertainment. Guns N’ Roses’ music is big in the gaming industry and is found in the following games.

The racing game Burnout Paradise is fast and exciting, which is why the famous Guns N’ Roses song “Paradise City” fits in perfectly as the theme tune. The game delivers a liberating experience because the track is not a traditional rigid race track, but instead is an open playground—the city. The intense speed, devastating crashes and classic rock come together to make it the best racing game ever made.

The Guns N’ Roses online slot features five of their most popular songs: “Sweet Child O’ Mine,” “Welcome to the Jungle,” “Chinese Democracy,” “November Rain,” and “Paradise City.” The graphics are all state-of-the-art Guns N’ Roses inspired, and the background art depicts a concert stage with dazzling lights. Online slots have become a good way of promoting an artist’s music, and not only do the Coral online slot games feature Guns N’ Roses, but there’s other top stars such as Jimi Hendrix who also has his own slot on the platform. This concept is a very effective way to keep older artists relevant for future generations to enjoy.

The music video game Rock Band 2 features many great songs, one of which is from Guns N’ Roses. In fact, when it was featured, it was the first new song from Guns N’ Roses in 14 years—“Shackler’s Revenge”—which is from their over-a-decade-in-development album Chinese Democracy. Rock Band 2, which has both console and mobile versions, is a masterpiece of entertainment with all of your favorite bands in one place.

One of the best-selling games in pop culture, Guitar Hero III, completely changed the future of music games, including the way soundtracks are chosen. Classic artists and songs, such as Guns N’ Roses’ “Welcome to the Jungle,” and Pearl Jam’s “Even Flow,” are part of the best-selling game’s song list. This game, available on both console and mobile versions, is a great way for younger generations to experience classic rock while being entertained.

Guns N’ Roses are still American icons and being featured across a spread of platforms, such as on mobile and console, helps keep the band relevant even today.