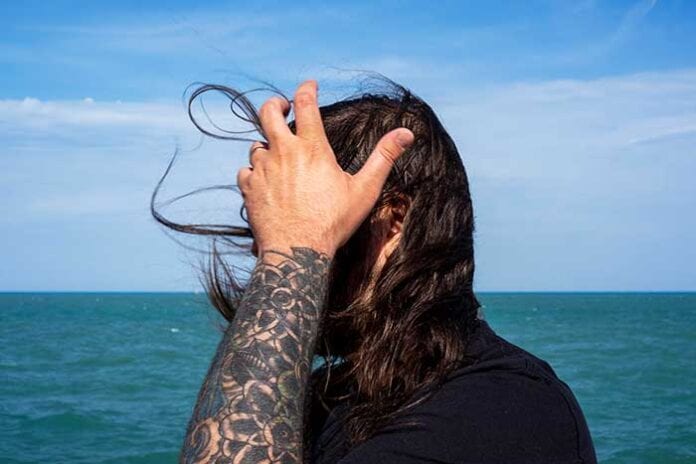 LISTEN TO THE EXCLUSIVE PREMIERE OF ANNIHILUS’ NEW SINGLE “THE VOICE OF SHAI-HULUD” ONLY ON OUTBURN.COM

Chicago based one-man metal project Annihilus will be releasing its debut album, Follow a Song from the Sky, via Federal Prisoner (label by Greg Puciato [Dillinger] + Jesse Draxler [visual artist]) on August 13th. “The Voice of Shai-Hulud” is the second single released off the album.

“This was the first song I wrote for this album, and is one of my favorites on it. I kind of used it to sonically and thematically guide the rest of the tracks, working more with layering guitars and synths and different vocal dynamics than I ever have before. While most of this record is very lyrically personal, this one takes elements from deep Dune lore, which are some of my favorite stories. The spoken word part in the chorus is borrowed from a Fremen mantra first shared in 1981’s God Emperor of Dune, which honors the harsh way of life and the unrelenting perseverance of the natives of Arrakis.” – Luca Cimarusti

For Chicago-based musician Luca Cimarusti, black metal held the appeal that lures so many listeners into its caustic wavelengths—it exuded the power and primal spirit of metal with the no-frills delivery and raw performance of punk. The added element of the genre’s fixation on mystery and fantasy, and the way so many artists in the field were shrouded in a veil of their own creation, was an added bonus. It was with these sonic, stylistic, and performative attributes that prompted Cimarusti to develop his own black metal project, Annihilus, back in 2019. Where the project once provided a refuge of self-reliant creativity, the toils of the last year imbued the project with an even greater urgency and gravity. With his sophomore album Follow a Song From the Sky, Cimarusti continues to mine the atmospheric essence of black metal while pushing the stylistic, thematic, and emotional boundaries of the genre.