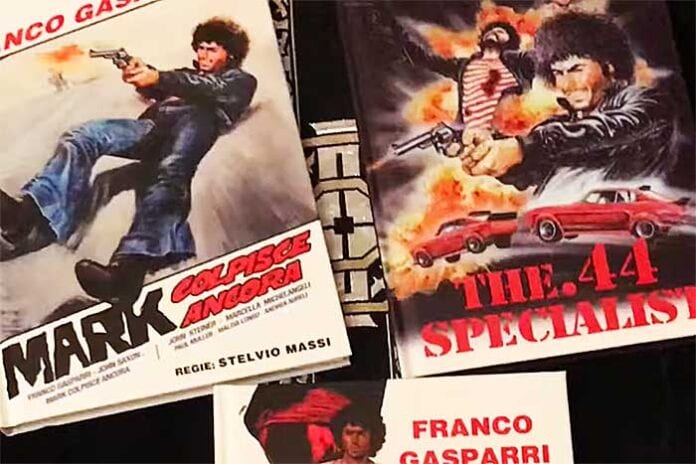 We’ve reviewed a number of musical releases from Cineploit here thus far, but the Austrian label has also moved into the Blu-ray realm over the last couple years and sent us a care package in advance of their two forthcoming releases, due out at the end of March.

Just as Cineploit’s musical arm focuses on sounds indebted to classic genre and exploitation cinema, so too is their cinematic output dedicated to Italian genre fare and truly giving it the deluxe treatment. The films we’re discussing today are from the Eurocrime genre, a period in Italian cinema that capitalized on American films such as Dirty Harry and The French Connection, while giving it an even more hyper-stylized and violent twist.

These two films are actually outliers of sorts for the genre and make for an interesting watch when paired together. The Hired Killer is a very early example of the genre from the late 60s, a period when Italy was still very much in the throes of their EuroSPY boom, riffing on the jet-setting spy adventures of James Bond, Matt Helm, Derek Flint, and the like. Meanwhile, The .44 Specialist is actually the third film in a trilogy about “Mark the Cop,” a franchise that was popular in Italy and abroad, yet somehow never made much of an impact to the public domain or home video markets here in the States.

Italy’s penchant for capitalizing on cinematic trends of the day made their films very popular here in the States during the 80s home video boom. This was especially true of their horror films like Suspiria and Zombie, but many Eurocrime titles also made the rounds in grindhouse theaters and on VHS, such as Violent Naples and Assault with a Deadly Weapon. The “Mark” films are comparatively harder to find over here as a result of this, which makes this Mediabook all the more welcome, since all of Cineploit’s Blu-rays are region free.

The .44 Specialist hits more of the traditional beats of the Eurocrime genre with regards to its loose feel, charismatic protagonist, and funky music, but even this film doesn’t quite fit into the same 70s cop flick milieu of its contemporaries. Franco Gasparri’s “Mark” isn’t a “shoot first, ask questions later” supercop, nor is he a burnt-out cynic nearing retirement. Instead, Gasparri’s handsome looks and easygoing personality almost sets him up as part of the counterculture in a way, even though Mark Terzi is definitely determined to uphold the law and get the job done.

The job at hand in this film involves the detective infiltrating a terrorist group and getting his hands dirty while trying to ingratiate himself to the gang’s leader, played to the slimy and crazed hilt by John Steiner. The film was known as Mark Colspice Ancora, aka Mark Strikes Again in Italy, and plays into that country’s tumultuous political climate of the day with its left-wing extremist plot, but director Stelvio Massi and screenwriter Dardano Sacchetti also put in a good amount of paranoid thrills into all of the bloody, squib-filled shootouts.

Massi was something of a Eurocrime master, despite not quite possessing the name recognition or pedigree of someone like Umberto Lenzi. The latter may have helmed some of the genre’s most famous entries, such as the aforementioned Violent Naples, but Massi was arguably just as formidable within the genre. He definitely got enough practice, directing no less than 14 Eurocrime flicks between 1974 and 1980. Mark Strikes Again may not be our favorite Massi, but his batting average is extremely high, his films almost always move along at a good pace, and the set pieces are stylish and thrilling.

The disc itself opens with a disclaimer that there was some damage to the negative when scanning Mark Strikes Again in 2K, and the differences are noticeable, but never to the point of permanent distraction. The levels of color saturation do dip now and then, but this film has never been easy to see here in the States, and this looks leagues better than any shoddy bootleg that has been seen in the past.

Extras include a portion of a career spanning interview with composer Stelvio Cipriani, whose impressive résumé has included scores for some of Italian cinema’s most beloved entries. There’s a cinéma-vérité approach to how the camera moves in and out of focus on Cipriani as he darts from project to project, discussing his process in composing films like The Bloodstained Shadow with prog rock gods Goblin or his score for the fun Italian horror flick Tentacles. The subtitles also get a bit wonky, but thankfully the English and German translations for the film itself don’t have as many errors. Italian, English, and German audio options are made available, and the disc itself is packaged with a double-sided poster and a booklet/essay for each of its three cover options.

The other extras on the disc are with Stelvio Massi’s son Danilo and cameraman Roberto Girometti, and it’s great to hear Danilo’s memories of working with his father as an assistant director. He focuses a lot of time on Massi’s collaborations with actor Maurizio Merli, who’s often viewed as the face of 70s Eurocrime, but both Danilo and Girometti do spend some time discussing the “Mark” films and Stelvio Massi’s legacy as a director in the Italian genre film industry.

Changing gears, The Hired Killer is something of a revelation, a proto-Eurocrime banger that doesn’t exemplify the genre’s clichés, due to its aforementioned early placement within the cycle. Director Franco Prosperi was something of a journeyman filmmaker who shouldn’t be confused with the Mondo film director of the same name. Instead, this Prosperi traveled from genre to genre, directing EuroSpy pictures and comedies, exploitation and action films, sort of a jack of all trades and master of none. The Last House on the Beach, The Boxer,and a co-directing credit with Jess Franco on 1980’s White Cannibal Queen might be the director’s claim to fame, but make no mistake, it’s The Hired Killer that should be Franco Prosperi’s calling card.

The 60s vibe is all over this film, with Prosperi and co. Americanizing their film to a fault. For starters, there’s some great NYC period footage to be had, as The Hired Killer details the story of an assassin roped in for one last job for his shadowy employers, “The Organization.” Prosperi nabbed American actor Robert Webber for the lead role, a character who made his name in classics like 12 Angry Men and The Dirty Dozen before bookending his career with stints in Italian genre cinema.

Webber’s stoicism fits the film’s grim and dour mood perfectly, and his performance shines early on in a scene where the focus is on his character’s ritualistic and measured preparation for a hit. This hyper-masculine coolness is paired with a veryyoung Franco Nero as his partner and future replacement who’s all good looks with a stylish pair of glasses. If all of this sounds slightly familiar, that’s because Michael Winner’s The Mechanic seems more than a little indebted to this film with regards to its plot, although Robby Poitevin’s bold, brassy, and swinging score places this firmly in that 60s mold.

Speaking of that score, it’s included here as a playable extra on the disc, along with a fun and informative featurette from actor, writer, and director Mike Malloy. If you’re even remotely interested in the Eurocrime genre after reading these reviews, Malloy’s documentary Eurocrime! The Italian Cop and Gangster Films That Ruled the 70s is essential viewing, and Malloy’s insights into tough guy cinema as a whole makes him a perfect guide as he details differences between 60s Eurocrime and its 70s counterparts.

Elsewhere, a double-sided poster is included, as well as a 28 page booklet/essay combo and four different cover variations to the Mediabook, each with a different theme. The film itself was scanned in 2K and looks great, despite the fact that The Hired Killer isn’t really a film that relies upon bold colors or panache. Audio options are German, Italian, and English, with German and English subtitles available, and a photo gallery rounding out what’s definitely something of a hidden gem of early Eurocrime.

Both discs are hugely recommended and are clear labors of love by the Cineploit team. Are there some minor bugs? Sure, but these packages are definitely geared towards the collector market and tick all the boxes genre fans crave when it comes to unearthing these niche films. ~ George Pacheco