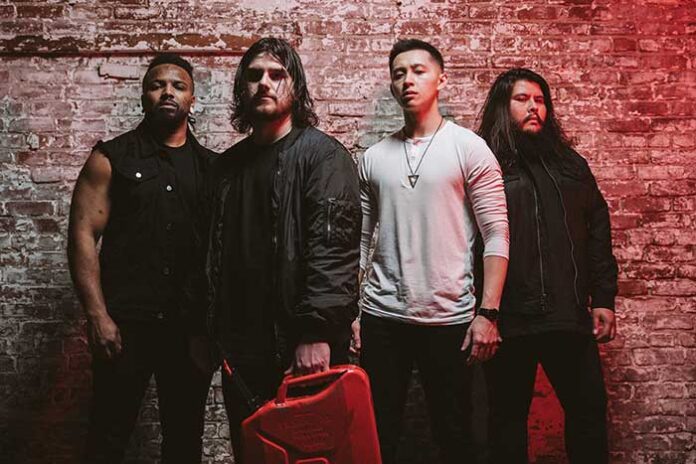 WATCH THE NEW MUSIC VIDEO “HYPOCRITE” FROM OF VIRTUE ONLY ON OUTBURN.COM

Signed to Arising Empire, Of Virtue has premiered a music video for “Hypocrite,” the band’s latest single. What began as a humble, promising metalcore act born from the blistering chill and barren fields of mid-Michigan has erupted into an internationally recognized and critically alternative artist.

Take us inside “Hypocrite.” Who inspired it and why? Give us the inside scoop!
Actions can speak louder than words, and unfortunately, this song is the child of an ever-growing unrest during these in the world around us in mid to late 2020. The forced shutdowns of businesses, ever growing racial tension and violence being perpetrated by the police on black people/POC, the political/economic climate as a whole… it all created so much tension. Social media/media as a whole just became a toxic carrier of misinformation, add cancel culture—all during a once in a lifetime historic event. At times, it truly felt like we as a society were devolving into who could just shout the loudest regardless of the point or information that was being presented to us on the other side. Another hard truth is: we often don’t (or won’t) point the finger at ourselves for blame. This song pinpoints that specific moment when we place the responsibility of changing ourselves onto the world/someone else. People make the choice to tout a particular belief system or way of thinking and knowingly go against it in order to manipulate or create the best outcome for themselves their own egos.

Any fun stories from the video shoot you can share?
We shot the bulk of the videos for “Hypocrite” and ”Sinner” on green screen, and that was completely new to us. We’ve never done that before, and we couldn’t be happier with the process and result. Overall, the experience on set with Orie, Dana, and Mike (Taylor) was fantastic! Aside from that, the owner of Electric Pony Studios, where we were shooting, even gave us all a tour of the facility and showed us a beautiful mural of Nipsey Hussle (R.I.P.), which was done by one of Snoop Dogg’s graffiti artists. Or when she told us how they recently had Korn in there and she didn’t know who they were!

You released “Sinner” and now “Hypocrite.” What’s next on the docket for Of Virtue?
Both of these songs will be a part of a bigger project, an EP, we will have coming out soon! Being able to have these songs be the first singles out highlights the peaks and valleys we are going to be moving through sonically. Nothing was off limits during these sessions and we can’t wait to share more of that with everyone soon!

You’ve signed with Arising Empire. How is it working with a new label?
Tobbe, Robin, Marc, and everyone over at the label have been nothing short of extraordinary. Arising Empire, in my opinion, is home to some of the best up-and-coming bands in metal and rock right now, from our old tour/show mates in Aviana, Imminence, Awake the Dreamer to Future Palace, Landmvrks, and a ton more. Having a label that mirrors our vision—creatively and most important, ethically —is invaluable these days and gives us the peace of mind to keep striving to be the best version of ourselves.

Exclusive Premiere of HALF HEARTED’s Mini Movie for “One Drink,” “Liar.”...