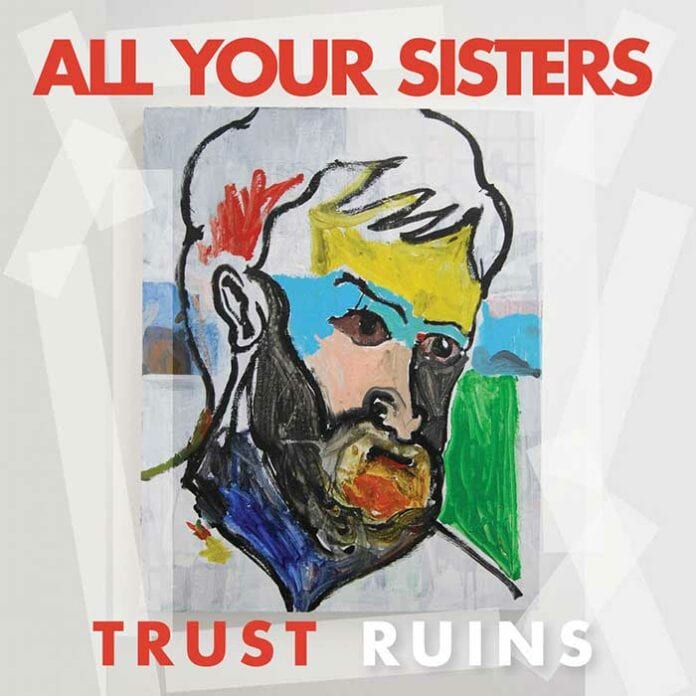 “A DEMON LEFT THE DOOR OPEN”
This is the ending of a chapter and the beginning of a new one. A closing of a door from a previous life. I tried having fun. I tried singing. I don’t know what else to say.

“POWER ABUSE”
This was the first song I started to work on for this album. It was destroyed many times. I started creating this on an MPC2000, but it kept crashing and crashing. I think the universe was trying to tell me to stop. I wasted a few months trying to get it serviced. I sold the 2000 “as is” for parts and bought a different machine. Four things stuck in my head in 2017. “Pain”, “Fear”, “Power” and “The Bullet.” They had to get out somehow.

“YOUR WAY”
This is song is loosely based on some events from my childhood. I grew up in a suffocating, charismatic church. The youth pastor was a piece of shit with no comprehension of boundaries. I told him to “fuck off.” This was the one of the first times I realized I needed to find my way and defend it. I guess it still pertains to today.

“DIVING LINES”
This song took a while to figure out in many ways. I think it was the first song that Jack Shirley and I mixed. I tracked out a lot of it at home There were way too many audio tracks. Maybe 50-ish? We were pretty happy to move on after getting the first mix done. In the end, it worked out, but it was a bit of a mess to start with. Luckily, it’s a fun song to play live.

“WINDOW”
I think of this as more of an end to side A for the LP. All of the lyrics came from reoccurring dreams. I kept seeing this person with an indistinguishable face looking outside through a closed window on the top floor of a two story farmhouse. The outside, where I was at, looked like a prairie or somewhere else in the Midwest. I was trying to make sense of it all, but there was very little luck. It was a god damned dream. I was sitting down on the dry grass staring at my hands. There was a constant bright glowing red on the horizon and the nearby fields were infected with disease. After a while it became apparent that I was actually that no-faced person staring out the window. In an instant, my sense of body relocated to that place in the house at the window. I was the no faced person. I remember not getting frustrated from my lack of face, but I kept touching it anyhow. I remember becoming complacent with the situation, but boredom eventually crept up. It seemed like the only way out of the situation was to jump out the window head first. Right before I did, I woke up.

“A FACTORY OF UNPLEASANT DREAMS”
A giant factory set in the middle of Kansas or Nebraska was cranking out dark smoke and dark dreams. This is the score to the dreams I was having in 2017. This seemed like a good start to side B, cause things were about to get worse.

“SELF-MEDICATING”
This song is exactly about the title. This word came up often when I worked as a paramedic. In 2016/2017, I was self-medicating to get by, but eventually hit a roadblock. I kept asking myself “WHY?” I eventually wrote a song that related to my thinking during this time period.

“TRUST RUINS”
This was one of the early demos I made for the album. It was right there with “Power Abuse.” These two songs are the backbone of the record and show where my head was at at the time. For “Trust Ruins,” I experimented with cymbals, sampling them and doing all sorts of other manipulative things to those samples. Cymbal harmonics are one of my favorites sounds. I could listen to these isolated tracks from this song all day.

As to far as the lyrics go, they relate to my religious upbringing. As a child I spent a lot of time thinking about hell and what it must be like. The pastor and his wife sure thought a lot of people where going there to burn up eternally in some fiery pit and apparently you didn’t have to do much for a one way ticket. I always hoped that if I ended up in hell there would be an extra special place reserved for the church pastor, his wife, and and the congregation. They’d spend eternity there living out the version of hell they threatened others with. At least I hoped so.

“THE ENABLER”
This is the first song on the album where I had fun messing around with piano. It was completely written on the piano and everything else was added later. Using a slide for the guitar was fun, too.

“THE DECEIVER”
This is the happiest, most danceable song and it needed to be at the end. I also wanted it tied together with the first song on the album.

Trust Ruins can be preordered via The Flenser here.

ABOUT: All Your Sisters was conceived in 2011 in Reno, NV by Jordan Morrison as an outlet to process the suffering that Morrison witnessed while working graveyard shifts as a paramedic. The primal state of debased humanity certainly left a blistering mark that can be heard in the project’s third full-length, Trust Ruins. Morrison also mines themes from his fundamentalist Christian upbringing as well as a series of paramount life events – both devastating and blissful – that preceded the album’s inception.

In the final two months of 2016, then residing in San Francisco, Morrison experienced the elation of becoming engaged in tandem with the fatal drug overdose of his brother-in-law, as well as the Ghost Ship warehouse fire in Oakland that claimed the lives of many in the Bay Area music scene. Compounded with the recent presidential election, a sense of inescapable doom and dystopia lingered, forcing Morrison to re-examine the direction of his life. He explains, “This record is about making hard life choices, living with those decisions, and the struggle to live life on life’s terms. If I die tomorrow, I don’t want to have any regrets.”

Engineered by Jack Shirley (Deafheaven, Oathbreaker, Bosse-de-Nage), Trust Ruins is the score to a series of de-indoctrinating sermons, armed with marching protest beats. Drawing on the energetic industrial and post-punk influences of the previous Uncomfortable Skin (The Flenser, 2016) and Modern Failures (2014) LPs, Trust Ruins is a dark, dynamic assortment of songs that pushes far past nostalgia to create something new. Punchy electronic drums provide a foundation for layers of dreamy piano, howling guitars, brooding synths, and Morrison’s commanding croon that often unravels into a yell. While Trust Ruins may seem hopelessly bleak, it is anything but with its moments of beauty and raw emotion that offer a sense of hope in a crumbling world.