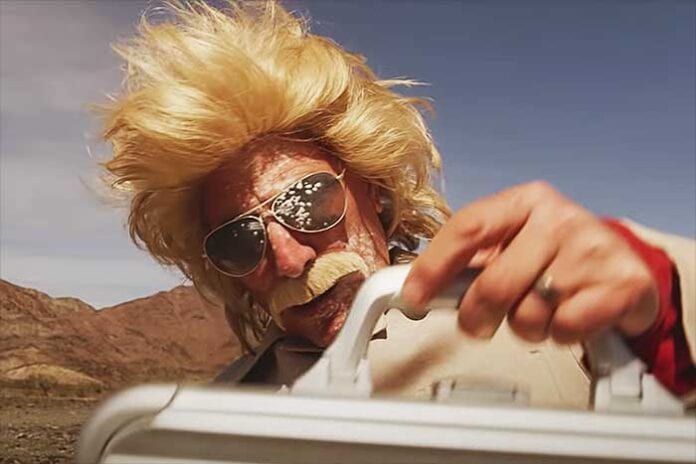 Puscifer unveils the next chapter in the saga of desert dwelling scamp Billy D with the psychedelic, alien-infused mini film for “Bullet Train to Iowa.”

“The ‘Bullet Train to Iowa’ video is sort of a bridge between the Money $hot Live at the Mayan Theater performance (“Billy D and the Hall of Feathered Serpents”) and the Existential Reckoning Live at Arcosanti performance,” explains Maynard James Keenan. “Kind of like what ‘Rogue One’ is to the Star Wars films, but without the Storm Troopers and snarky robots.”

The clip was created by longtime Keenan collaborator, Meats Meier. Meats’ work with Puscifer spans the band’s history, from the band’s debut video, “Queen B,” which saw the introduction of the group’s de facto mascot of the same name, to the special-ops laced “Dozo” video, and most recently, the prescient “Apocalyptical” clip, which features the visual wizard surfing the pandemic-swept streets of Los Angeles. “Bullet Train to Iowa” also features a subtle nod to Money $hot, with the cowboys featured on the album’s cover, serving as bartenders in the newly released footage.

The band’s next visual offering arrives April 17, with the global streaming event, “Billy D and The Hall of Feathered Serpents featuring Money $hot by Puscifer” (tickets: pusciferlive.com) a performance that sees Puscifer build upon their Luchador-infused performances surrounding the 2016 album, Money $hot (which will be played in its entirety).