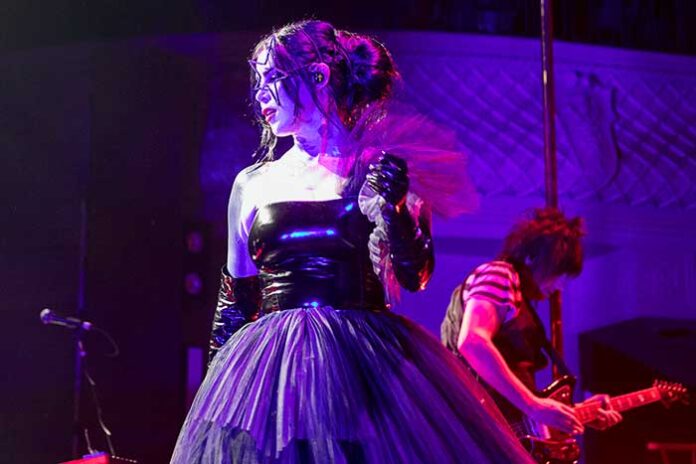 Supporting her just released debut album, Love Made Me Do It, the one and only Kat Von D recently embarked on a four date mini West Coast tour, wrapping it all up at San Francisco’s August Hall on a Saturday evening. With top-notch production, a stellar band backing her up, and many of her die-hard Bay Area fans up against the barricade, the show was definitely a success.

As the lights dimmed, the backing took the stage one at a time, each throwing a handful of long stemmed roses out to the crowd. First was contortionist Brynn Route, followed by synth player Sammi Doll, synth and guitar player Gregg “Mr. Pharmacist” Foreman, and drummer Dave Parley (who also plays with opener Prayers) before Kat Von D took the stage, clearly appreciative of the fans that were screaming as soon as they saw her.

Although the small stage may have appeared a bit crowded with video walls and stripper poles on either side, in no way did it take away from Kat’s performance, it actually enhanced it. The whole production was designed by visual artist Linda Strawberry (who has worked with Smashing Pumpkins) and it suited the show quite nicely. Although Brynn Route may have spent a significant portion of the show on the pole, she was a true artist, and her freakish yet amazing creature-like moves fit the synthwave inspired music perfectly.

Taking a moment to thank the members of her fan clubs that were in attendance, and to lead the venue in singing Happy Birthday to Mr. Pharmacist, Kat Von D was enjoying being on stage singing to her fans. Her voice was perfect, as highlighted by “The Calling,” which she called the only non-love song on the album, and a song about Vampira actress Maila Nurmi.

By the time it was all said and done, Kat Von D proved (not that she has anything to prove) that she is a very gifted singer, and her musical career seems to have big things in store for the future.

Supporting Kat Von D on these show was Prayers, the Southern California based synth duo that includes Kat Von D’s husband, Leafer Seyer. With their harsh beats and synth heavy sound, they were the perfect band to open the evening.

DISEASE OF THE ANIMA TOUR