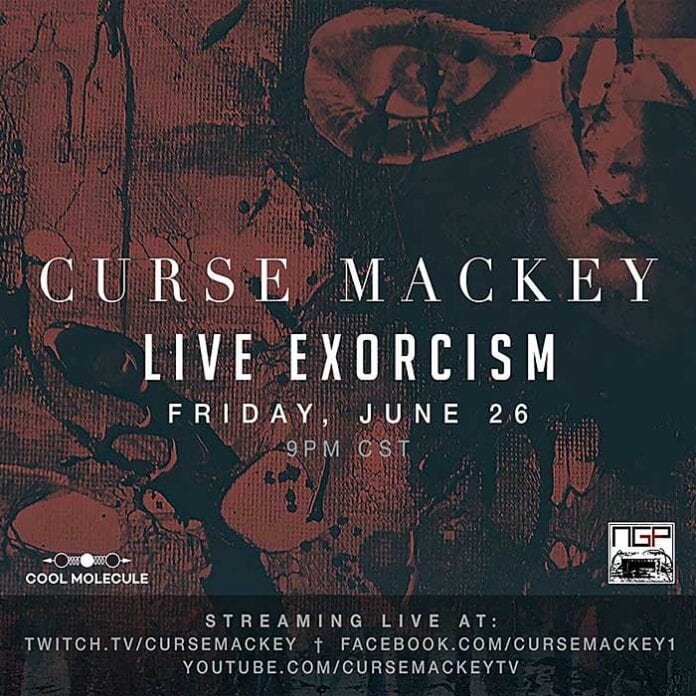 Curse Mackey will perform his first solo livestream on June 26th at 9pm CST. The event is entitled “Curse Mackey: Live Exorcism” as Mackey will be performing material from his album Instant Exorcism along with a with live chat, post-show Q+A and virtual art gallery showing of Curse Mackey original art pieces.

Before the COVID19 pandemic caused wide sweeping cancellations for artists around the world, Curse Mackey was poised for one of the biggest years of his career having come off of a successful 2019 that saw the release of his solo album INSTANT EXORCISM on Negative Gain Productions, which was considered by many genre playlists as a top release. Mackey was poised to extensively tour the US throughout 2020 and into 2021.

Fast forward to June 2020 where to this point, Mackey has had over 60 shows cancelled. The cancellations began in March, Curse was mid tour with darkwave legends Clan of Xymox when the decision to cancel the rest of the tour was made on March 15th. He was set to join PIGFACE on a 45 date US summer tour tour, and also play supporting dates for Stabbing Westward and Front 242.

THE PIVOT TO VIRTUAL CONCERT PRODUCTION
In collaboration with his partner Rona Rougeheart of Austin dark electronic act SINE, the two began to build a micro soundstage and TV studio in their rehearsal space. Mackey and Rougeheart went live for the first time on June 5th with an eighty-minute live program that debuted the new SINE single “Desolate District” and featured a guest appearance and interview with Chris Connelly (Ministry, RevCo, Pigface etc).

Gothabilly Supergroup THE 69 CATS Releases New Video for Cover of...