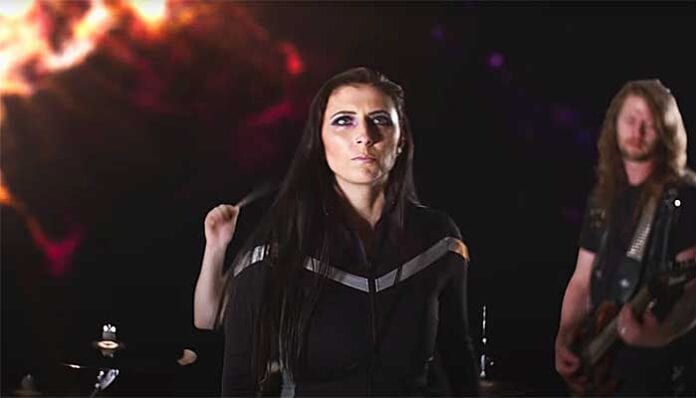 Earlier this month, Canadian melodic power metal quartet UNLEASH THE ARCHERS announced the upcoming release of their fifth full-length album, Abyss, out August 21, 2020 via Napalm Records. Lifted by the urgent, breathtaking vocals of frontwoman Brittney Slayes, on Abyss, the band re-cements themselves as an unequalled, undeniable metallic force with their strongest album to date.

Today, the band is thrilled to reveal a brand new, otherworldly music video for the album’s colossal title track, ”Abyss.” Musically, the track unveils the diversity of UNLEASH THE ARCHERS, delivering one earworm moment after another. Its accompanying video, directed by Rod Scobie (also director of the band’s music videos for “Awakening” and “Northwest Passage”), takes the viewer on a CGI rollercoaster ride, launching them firmly from the terrestrial plane to the celestial one. At first, the viewer could assume they’re viewing a regular performance video, but little hints here and there begin to reveal that it is far from your average clip!

Frontwoman Brittney Slayes says about ”Abyss”:
“This track set the tone for the whole record; conceptually, lyrically, musically, it all started here. Andy came up with the opening riff back when we were writing Apex, but I knew right away it didn’t belong on that record. When we finally started writing Abyss in 2019, this was the first song we wrote and it was the first song I listened to when the record was done. It symbolizes five years of hard work for us, and I think it does a great job of putting the listener in the right place emotionally to start the record. It hints at what the rest of the album is all about, but also doesn’t give it all away, not by a long shot!”

DEVIN TOWNSEND Launches Video for “Evermore” from Empath Due Out March...