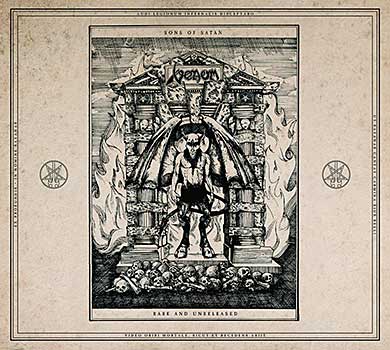 LAYING DOWN THEIR SOULS: Lesser and vastly more insignificant bands have had fawning and comprehensive biographies penned about them, so it is with a white-knuckled entreaty that we hope someone with a reasonable grasp and command of the English language is working on a Venom book, preferably an old guard member of the original wave of Britain’s metal scene. It’ll save the inevitable incomplete glossing over Venom’s history that reviews of this nature are limited to. But anyone worth their salt knows the basics—satanic extreme metal innovators, the title of their second album bequeathed an entire subgenre, their first two albums (first three, in my opinion) are absolutely un-fuck-with-able in terms of a broader musical and artistic significance.

Yours truly was struck by the Venom haymaker back in 1981 when, at the tender and impressionable age of 10, I discovered Welcome to Hell and it summarily and simultaneously amazed, shocked, and scared the snot out of me. Of course, the years have been both kind and unkind to the Venom legacy—the Assault series, the unchecked power of those early live shows, the splintering into Venom and Venom Inc., their representation of Satanism, in hindsight, can only be described as comical and really makes one wonder what anyone was afraid of and what sort of faulty filters and limited intelligence sensors the adults leading the 80s satanic panic were using to stew moral panic? But before Venom really took underground metal by storm with Welcome to Hell and Black Metal, there was the band’s demo era where they were still distilling ideas and wood shopping their sound.

In 1979, Venom was a four piece outfit from Newcastle trying to carve out a sound and image to distinguish them from the crowded NWOBHM pack. This is what Sons of Satan—as a re-mastered document of a rehearsal from that year and two 1980 demo sessions—highlights, that every band goes through growing pains as it attempts to find its own path. Herein, one can hear the band’s guise when fronted by original vocalist Clive “Jesus Christ” Archer and how they hadn’t yet fully cottoned on to velocity as a songwriting tool and over driven distortion as a sonic identifier. The rehearsal tape, ironically held in a local church hall, sounds like it was captured on a boom box from the far end of the room, but possesses nuggets of the fury that was to come. Early renditions of “Angel Dust” and “Raise the Dead” are particularly noteworthy, as is just how much the shackles of the NWOBHM had yet to be discarded by the band. Their 1980 demo, recorded at Impulse Studio, sees a bit more of a niche being sussed out by a slight lean towards a more Motörhead influenced bass tone and a general picking up of the pace, even if everyone is ridiculously out of tune most of the time. Dig Archer’s high-pitched screeches on “Angel Dust” and “Live Like an Angel (Die Like a Devil)”!

The overall highlight of this package is the opportunity to trace the progression of songs from their infancy to those final album versions, especially “Buried Alive” and “Raise the Dead” from their origins through demo recordings and what eventually appeared on Black Metal, not to mention the 1983 demo version of “At War with Satan” tacked on to the end of this package. Sons of Satan was originally released as part of 2019’s exhaustive In Nomine Satanas deluxe vinyl box set, so the hardest of the hardcore Venom fans likely already have this kicking around in their collections and the oldest of the old school tape traders probably have nth generation copies of this stuff on dusty TDK cassettes hiding in storage spaces and closets ‘round the globe. So, while it may seem like a redundancy or stretching of the perceived cash-in, Sons of Satan is in fact an interesting archeological artifact and evolutionary document that’s well worth checking out for those into knowing the roots of things while they wait for that damn book. ~ Kevin Stewart-Panko