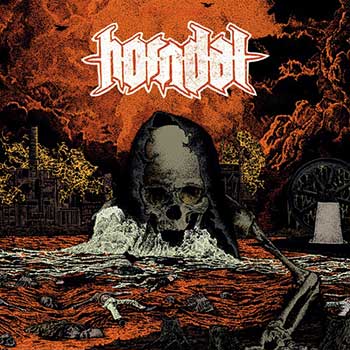 SLUDGY METAL CONFRONTS PROGRESS’ SHADOW SIDE: Horndal’s first album, Remains, told the tale of how the Swedish town of Horndal was gutted when the steel company that employed the majority of residents since the 70s suddenly shut down. The fallout of the company shuttering their factory birthed the thematic angle for the hardcore-tinged sludgy metallic thunder of the band that tackled themes of industrial dependence, capitalist margins, urban decay, and how upper class power impacts those on the economic rungs beneath them.

Now, as the story goes, an American tech company has put down roots in the town of 1,100 residents, but not without a cost, as Lake Drinker documents the company’s felling a portion of the local woodlands and the draining and polluting of one of the larger lakes in the area for their purposes. Lake Drinker puts the town’s second “deal with the devil” in the crosshairs for the bitterness and anger expressed throughout this album. With song titles like “Rossen” (the lake in question being drunk from), “Town Burner,” “Home,” and “Horndal’s Blodbad,” the connective tissue between band and subject matter is indelible. However, given the lumbering nature of their style and attempts at elegiac nuance throughout, that gritty anger isn’t always entirely obvious. Heck, it’s downright muted in spots.

“Rossen” gnashes with the propulsive spite of early Mastodon before an ill-placed clean midsection detracts from the initial gut punch, and “Horndal’s Blodbad” pairs a riff that’s crushing enough to have Matt Pike taking his shirt and pants off with a clanging, clean minor key layer that occasionally pulls attention from the browbeating that should be happening. Anguished screams propel the KEN Mode influenced staccato punch of “The Uprising,” but sustaining that energy runs into roadblocks posted by a soundtrack-esque respite that leeches power as quickly as it emerges.

In the quest for dynamic richness and ebb and flow, Horndal too often interjects sequences and movements that detract when they’re supposed to enhance. In the above cases, the listener has the boot removed from their throat and is given too much breathing room and leeway. “The Black Wheel” and “Kalhygget,” on the other hand, illustrate how the dynamic between elegiac inkiness and rumbling sludge metal thunder works, especially the latter track with its nod to the chugging of Slayer’s “Mandatory Suicide.” Like the town that gifted the band their name, subject matter, and fuck the suits attitude, most everyone impacted appears to still be adapting and finding their feet as the world progresses around them. ~ Kevin Stewart-Panko