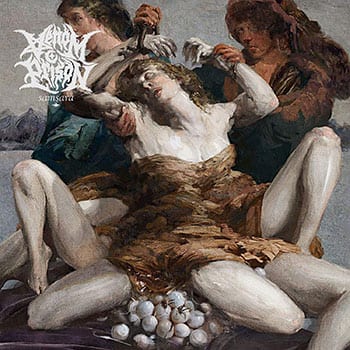 DEATH METAL WITH A MESSAGE: There are more than a few eyes on UK based death metal band Venom Prison on this, their second album, and by the time you’re a few songs in, it’ll be obvious why. Venom Prison takes the frantic sounds of mid era Cannibal Corpse, add in some early Obituary stomp ‘n’ pummel, and finish it off with some technical ecstasy to create an extremely caustic 44 minutes. Opener “Matriphagy” channels both the aforementioned death metal legends, while a song like “Uterine Industrialisation” has the frantic feel of early 00s Relapse Records tech death. The production is just this side of being too polished, but manages to keep a certain amount of ugly to it, which is exactly what this music needs. Lyrically, the band doesn’t beat around the bush, taking on social and political issues in a manner that is more punk than death metal at points, and it’s great. The meaningful lyrics help give the music a more personal connection, not that it’s hard to connect with death metal of this high of a quality. The end result is an album that clicks even more than debut Animus, the band crafting 10 songs here (nine and one excellent interlude) that are barely held together at the seams, and that crazed sound, combined with the obvious love of death metal and passion for what they’re singing about, makes this one a winner. ~ Greg Pratt