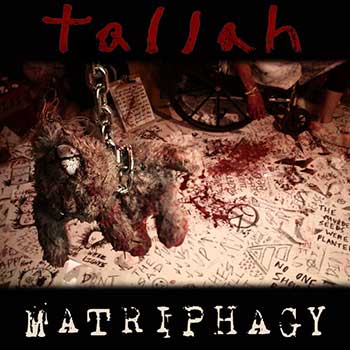 METALCORE MEETS NU METAL AKA NU-CORE: If you didn’t already know, matriphagy is the act of consumption of the mother by her offspring. Pretty brutal stuff, but somehow, it’s a fitting title to Tallah’s latest full-length.

Matriphagy is quite the thrill ride—a noisecore record wrapped in nu metal sheen, updated for the year 2020. Hell, Matriphagy might just be the sonic embodiment of everything this shit-tastic year has been—it’s uncompromising, brash, unpredictable, and volatile. The band describes their sound as nu-core, which makes sense. Elements of Slipknot and early Korn jump off the album on “No One Should Read This,” quickly modernizing nu metal tropes with a few plays straight out of the metalcore playbook.

Singer Justin Bonitz is a freak of a nature behind the microphone, effortlessly gliding between turn of the century rap-rock bars and Jonathan Davis-esque scatting (“Kungan,” “L.E.D.”), vitriolic growls (“Too Quick To Grieve”), venomous screams “(Cottonmouth,” “Murder Seed”), and melodic hooks (“Overconfidence”). Drummer Max Portnoy, son of all-time great percussionist Mike Portnoy, is also a star in the making behind the kit.

The line between nostalgia and modernity is thin on Matriphagy. You could easily see a band clad in black band t-shirts, Jncos, and chain wallets (hey, we all dressed like this at one point in time, right?) jumping in unison on stage while performing “Placenta,” a thick slab of modern nu metal if there ever was such a thing. And that’s not contained to just one track either. “The Silo” has a definite Orgy meets Dry Kill Logic vibe to it, “We, the Sad” is one of the best songs My Ticket Home never wrote, and closer “Red Light” sounds like what would happen if you tossed Coal Chamber, Dog Fashion Disco, and Slipknot into a blender.

While nu metal is often remembered, and mostly thought of, as a four letter word, the bastard offshoot of late 90s/early aughts hard rock, its bands like Tallah that give the oft-maligned genre reverence and some much needed updating. And that’s coming from someone who looks back at the heyday of nu metal with rose colored glasses. Matriphagy is as brutal as it is beautiful, an album that stands on its own in comparison to most heavy records being released today. In so many words, listen to this fucking record. ~ Brian Campbell

IMMERSE: The Weight That Holds Me Here