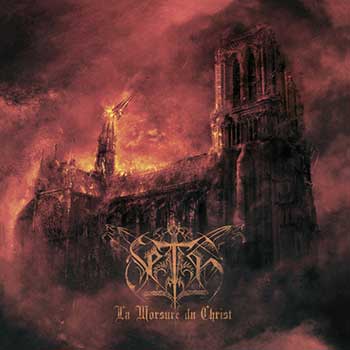 EXTREME BLACK METAL: While Seth may be the most unassuming name for an extreme metal band in the history of music, there is nothing unassuming about the French black metallers vicious Cradle of Filth meets Behemoth sound that socks you in the kisser right from the start on the bands sixth full-length (and first in nearly a decade) La Morsure Du Christ, which literally translates to The Bite of God, though some have pointed out that it’s actually a phonetic translation of Christ’s Death Is Certain. Heavy.

The opening title track is a venomous blast if ever one existed on record, introducing the listener to a cacophony of razor sharp shreds and uncompromising blastbeats. “Metal Noir” begins self-effacing enough, though it quickly devolves in blackened growls, furious riffage, and brutal drum work. Frontman Saint Vincent takes things to another level of extreme on album highlight “Sacrifice de Sang,” showcasing his malevolent vocal range atop a bed of heavy symphonies and dark melodies. This track is epic. “Hymne au Vampire (Acte III)” intensifies the symphonic quotient with ethereal soundscapes amid truly galloping leads, destructive vocals, and classical guitar interludes. “Les Océans du Vide” continues that recipe—a dizzying array of haunting synths, defiant, scathing vocal refrains, warp speed drumming, and blazing riffs—and feels like a sprint though it clocks in at over seven minutes. Drummer Alsvid nearly travels the speed of sound during the open bars of closer “Le Triomphe de Lucifer,” before Seth as a whole takes flight on one of their grandest efforts, a devastating track worthy of inclusion on the soundtrack to Hell itself.

La Morsure Du Christ is an exceptional slab of heavy music, one that doesn’t get too bogged down in over usage of synth and symphonics. While it’s been eight years, Seth is back with violent aplomb, ready to set the world on fire. This is one of best releases of the year. ~ Brian Campbell