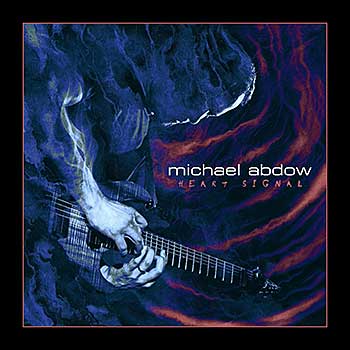 SIGNAL FLARE: You won’t find many more eclectic guitarists on the scene than Michael Abdow, and nowhere is that more apparent than his fourth full-length, Heart Signal, released this April on Couch Cat Records. While primarily known for his work playing guitar for acts like Fates Warning and Ray Adler, Abdow’s solo releases are nothing to sneeze at, with Heart Signal standing out as one of the best. Abdow makes a bold move right off the bat, opening the record with the relentlessly groovy odyssey “Weight of the World.” A lesser artist would have gone with the safer choice and used a 12 minute epic to close the album, but “Weight of the World” does a fantastic job setting the tone for the next seven pieces of proggy virtuosity.

Bassist Tony Franklin shines with thumping rhythms on “We Live Here” and the album closer, “Nature of Play”, complementing Abdow’s fretwork perfectly. “Cherry Blossom Descent” stands out as the strongest song on the album, blending in unique piano melodies to the beginning of the track, and it’s impossible to ignore the thumping bass drum kicks of “Heavy Drifter.” While the lion’s share of the tracks here are endlessly impressive, there are a few like “The Hand That Takes” that feel a bit repetitive and could have done with some trimming. But ultimately, Heart Signal is a highly listenable collection of wordless tracks, showing off the versatility and the sheer proficiency of the Fates Warning axeman. ~ Tyler Davidson