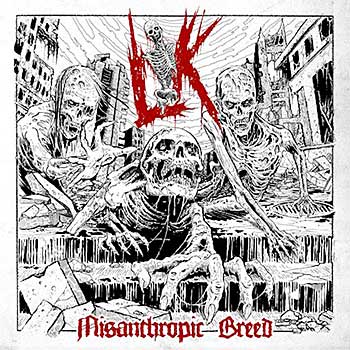 SWEDISH DEATH METAL: Stockholm’s Lik goes out of their way to prove they’re from Stockholm. The title of their previous album, Carnage, could be construed as unimaginative overuse if it wasn’t being perceived as a tribute to the legendary Stockholm band of the same name. For their latest album, think back to L-G Petrov’s unholy black bear wrestling with a box of razors yowl of said phrase on the title track of Entombed’s Wolverine Blues to see where influences are and tributes remain. The sound as purveyed by Lik on Misanthropic Breed may have been done to death—so to speak—over the years and spread from the Stockholm suburbs around the world at a pace only bested by the coronavirus, but when sinister, uppity riffs churned through relentless HM-2 distortion and powered by lockstep two-beat grooves are done right, death metal hardly ever sounds better.

All this is to say that Lik—on the surface, a questionable moniker that actually translates from their native lingo to “corpse”—play traditional Swe-death with an impeccable sense of classicism that’s matched by an exemplary verve. Their sound hails from the punkier side of the rhythmic spectrum allowable in death metal. This makes for the catchier and fuller-bodied barrage of riffs in “The Weird” and “Corrosive Survival” to have a greater, more nuclear impact.

What the quartet of guitarist/vocalist Tomas Ákvik, guitarist Niklas Sandin, bassist Joakim Antman, and drummer Chris Barkensjö has working to its advantage is the ability to augment rock solid and above average six-string volleying with subtleties and appropriately effective bridges, middle-eights, choruses, harmony sequences, superbly phrased solos, and breaks that demonstrate a knowledge of the intricacies of traditional songwriting and how to put it to use even as they play with thunder, lightning, and the sound of the world collapsing atop them. Examples: the very Maiden-esque dual guitar run in the midsection of “Decay,” the gradual tempo shifts and groovin’ shuffle in “Funeral Anthem,” and “Faces of Death,” the crunching mid-paced majesty of “Morbid Fascination,” and the album’s final cut “Becoming,” which builds off dynamic ebb and flow to offers a remarkable denouement on par with stadium rock show closers.

For sure there are a couple moments in which the mood is ordinary and musically milquetoast (“Female Fatal to the Flesh”) and the title track is entirely pointless, even as an interlude, but aside from those minority missteps, Misanthropic Breed is a crowning achievement and superb slab of death metal. ~ Kevin Stewart-Panko