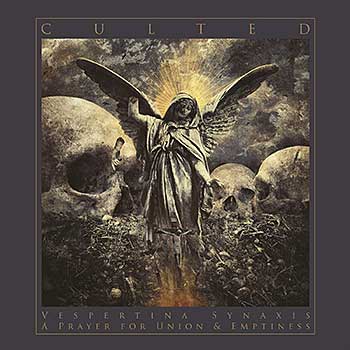 BLACKENED INDUSTRIAL DOOM: The story of Culted is an interesting one that goes above and beyond in demonstrating the reach of collaboration in the digital age. About a decade and a half ago, Gothenburg native and resident Daniel Jansson (Deadwood, Keplers Odd, The Ritual Inclusion of Code, ex-Blodluv) hit up Winnipeg natives, residents and Of Human Bondage and Time Kills Everything members Michael Klassen (also ex-Asher and Malefaction) and Matthew Friesen (also ex-Big Trouble in Little China and He Broke) about working on a project together that would be created from the ground up via file sharing and other internet sorcery. Klassen and Friesen drafted in their Of Human Bondage band mate, drummer Kevin Stevenson for a long distance relationship that initially produced Below the Thunders of the Deep, which saw the light of day via Relapse in 2009. The venerable label issued an EP and second full-length, and now the project has begun working with Season of Mist for its fourth release, Vespertina Synaxis – A Prayer for Union and Emptiness. What’s unique about this particular situation is that throughout Culted’s history there have been no live shows in promotion of any of the above-mentioned releases (which might explain why they’re no longer signed to Relapse). Furthermore, and most surprisingly, the band’s Canadian contingent still has yet to meet in-person with the band’s Swedish portion. Still, that hasn’t stopped them, and here they are with a new mini-album ready to wreak its fragmented havoc.

Consisting of three tracks, one of which is sample/noise intro, “A Prayer for Union,” Vespertina Synaxis sups heartily from the well of Neurosis, Blut Aus Nord, and Godflesh, Godflesh sounding and Godflesh related projects. The immediate inclination is to draw comparison to Songs of Love and Hate and Hymns, as those are albums in which “Da Flesh” employed the services of a live drummer, especially given that Stevenson offsets the cold, factory floor rhythmics with enough in terms of fills and flair for a warmer feel and noticeable human touch. The massive sounding, down picked guitar chords of “Dirt Black Chalice” have a very mechanical attack, but also have extra life breathed into them by lightning tom strikes and moments of adroit cymbal work. Given the methodology of construction, the layers of instrumentation and post-apocalyptic noises grow the song in a direction of density and thickness. Certain sections bring a catchiness and fleeting alignments to Ministry, Optimum Wound Profile, and Treponem Pal. “A Prayer for Emptiness” isn’t so much a song with a proper beginning middle and end as it is a hypnotic meditation on how to abrasively expand upon the simplicity of a two note riff. Over its course, the international conglomerate take a pulsing 4/4 pattern and add gristly soundscapes and harsh effects that span it from power electronics and doom/sludge to brief flashes of no-wave ambient and psychedelia. It’s not exactly the most charismatic piece of music or the most blood pumping way to spend 11 minutes, but appreciation for this will come from those able to submerge themselves in the repetition while submitting to the track’s gravitational ebbs and flows.

So yeah, hooray for the internet! Though it is to wonder what will become of Culted if a solar flare wipes out the online world as we know it or when Russian hackers disable Facebook and other social media to the point of crippling uselessness? ~ Kevin Stewart-Panko