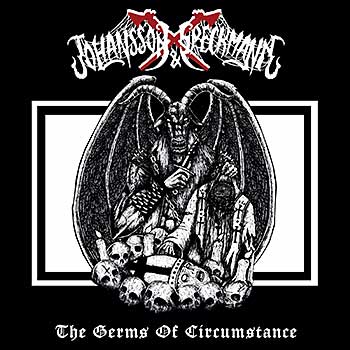 JOHANSSON & SPECKMANN
The Germs of Circumstance

Joining the pair once again is monstrous drummer Brynjar Helgetun (Massacre, Ribspreader, The Grotesquery), who is virtually unstoppable throughout the 27 minute affair. Recorded at separate studios in Sweden, Czech Republic, and Norway, the trio unleashes a fury of grimy riffs, furious blast beats, and vicious vocals.

On its eight interchangeable OSDM (Old School Death Metal) assaults, the band wastes no time getting started as the opener and title track kicks off with full brute force—gritty, grimy, downtuned, distortion-laden riffs with a mid paced D-beat gallop. Those wonderfully putrid Speckmann vocals—although less greasy as they are with Master (more like in the vein of Obituary’s Jon Tardy)—combine perfectly with Johansson’s Swedeath HM-2 guitar tone.

Tracks “One World One Leader,” “Generations Antidote.” and “I Was Left to Stare” provide plenty of traditional death metal aggression, while “Provoke the Collective” introduces some punk rock qualities in addition to some grindcore elements that are found on “I Was Left to Stare” and “Take the Lions Share,” which the latter is probably the most varied track on the album consisting of several dynamic tempo shifts.

As with every Johansson project, you know exactly what to expect—simplistic, riff-tastic mid paced rhythms and fundamental, head down, pummeling, classic D-beat Swedish death metal. And with Mr. Speckmann once again on board, the band is blazing a fiery path on each composition. Whether or not one may be tired of Johansson’s numerous outputs, Johansson & Speckmann isn’t at all vastly different from any of his other projects, either.

Unashamedly, there are no frills and no surprises on The Germs of Circumstance. It’s more of the same style that Johansson and Speckmann have created on their previous records and what they play in their respective bands. If you’re already a fan of both musicians, the numerous band’s both members are in, or OSDM, then The Germs of Circumstance is a worthwhile investment. ~ Kelley Simms