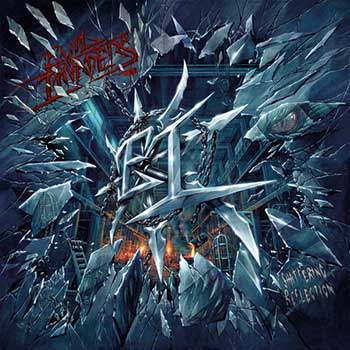 MELODICALLY MATURING THRASH/SPEED METAL: The personal sticking point yours truly has always had with this, the most famous Belgian band to ever name themselves after a Razor song/album, is the yawning divide between their live shows and recorded works. The majority of videos—promo and otherwise—featuring this questionably hirsute quartet show a band bristling with energy who know how to work stages like pros and mug at cameras and crowds like protégées of Slade’s Noddy Holder while headbanging with the sort of reckless abandon that folks like Jason Newsted are paying the price for in middle-age. Their previous two albums, on the other hand, have been serviceably decent, if not quite good, but have failed to capture that same explosive blast of spirit and strength.

Right out of the gate Shattering Reflection, album number three, appears to address this failing. “Hissing in Crescendo” bubbles over with riffs drenched in screeching pinch harmonics, galloping thrash from the heart of 80s Bay Area and an infectious chorus someone on the Sunset Strip would experience a tightening in the crotch after hearing. From there, the album gets progressively more melodic. “Die for Me” is the finger wagging overlap between German thrash and classic Maiden, while “In Deepest Black,” “Forgotten Memories,” and “My World” are all stadium ready, hair flipping power ballads in the vein of Skid Row’s “18 and Life” and Megadeth’s “In My Darkest Hour.” A massive departure, for sure, but a welcome left turn for a band not only searching for identity in a crowded speed metal scene, but also hoping diversity brings longevity in the same way it did their old school heroes.

Even though they spend a lot of time poking the “selling out” hornet’s nest, Evil Invaders continues with silky ferocity, spitting out the classy thrash of “Sledgehammer Justice,” which, with it’s gussied up middle section and melodic shifting under the leads, exists as one of the most dynamic and fun songwriting moments of the band’s career. The band does similarly on “Eternal Darkness” and “The Circle,” both of which start as homages to Metallica’s Black Album before shifting to a salutation to early to mid 80s West Coast speed metal (the former) and more caustic Canadian thrashers Sacrifice and (naturally) Razor.

As a whole, however, the dominant thrust of Shattering Reflection appears to focus more on heavily layered melodics that incorporate both fiery velocity thrashing and plodding mid-paced traditional/mainstream/power metal. Whether fans and supporters will be accepting of some of the bolder moves made here remains to be seen, but this record is a step in the direction of maturity and spectrum broadening. ~ Kevin Stewart-Panko

THE SOUNDS: Things We Do For Love