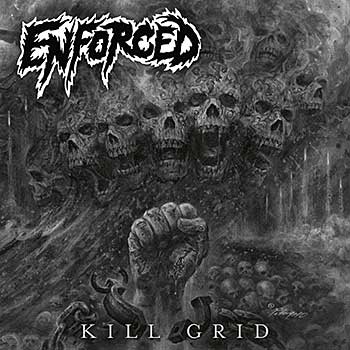 Formed in 2016 out of the ashes of various hardcore and punk bands, Enforced rapidly became a live fixture within the Richmond local scene by sharing stages with the likes of Sacred Reich, Red Death, and fellow brethren Iron Reagan. Catching the attention of Century Media with its 2019 debut album At the Walls, Kill Grid continues the band’s blazing aural assault on its razor sharp war themed tracks.

Album opener “The Doctrine” immediately strikes with ferocious, early era Metallica-esque riffs, blasting drum patterns, and rapid-fire vocals. Vocalist Knox Colby’s throat ripping delivery is as brutal as any voice in the genre today. The Bolt Thrower infused “UXO”—a military term that stands for Unexploded Ordnance—makes a lot of sense due to the track’s relentless double bass battering similar to a bomb strike assault upon the unsuspecting listener’s ears. The relentless pace of “Malignance” possesses a Slayer Show No Mercy/Haunt the Chapel era type of vibe with a crossover thrash appeal in the vein of Exodus/early Testament/Slayer, while “Curtain Fire” (another blistering military themed track) contains an ominous Slayer/Metallica/Nuclear Assault-esque intro.

The striking cover art was created by the revered Joe Petagno (Motörhead, Sodom), while the band’s longtime friend and studio wizard Bob Quirk (Memory Loss, Misled Youth) was the engineer and Arthur Rizk (Power Trip, Cavalera Conspiracy) mixed and mastered the release. Consisting of nine tracks with a 41 minute runtime, the songs actually fly by without overstaying their welcome.

When dealing with this particular metal subgenre, it’s rather difficult for a band to be original these days. However, Enforced takes the tried and true thrash sound with a punk/hardcore base and fuses it with new modern production values and manages to sound fresh and vibrant. Again, the amount of classic chugging thrash riffs throughout the record are so addictive, the urge to headbang furiously is uncontrollable. Kill Grid will most certainly put Enforced on the top of the heap of the new school of the crossover/thrash scene. ~ Kelley Simms