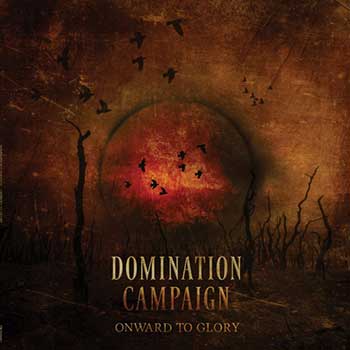 DEATH METAL: The initial buzz surrounding Domination Campaign has revolved around the fact that the project is the brainchild of Psycroptic vocalist Jason Peppiatt. His bandmate Joe Haley was drafted in to help with drums, engineering, and production duties, but Onward to Glory essentially spawned from the creative well of Peppiatt, who wrote all the material and played guitar, bass, and, of course, did vocals. What’s taken a backseat to Domination Campaign’s billing as “Psycroptic side-project” is that the album’s theme centers around renowned battles from the pages of history and the embellishment of them in the way only a death metal veteran would be able, especially a gentleman who, in addition to Psycroptic, has a list of priors that include Mutilated Spastic Iguanas, Goreverk, and Born Headless.

The information provided doesn’t specify which conflagrations Domination Campaign has chosen to zero in on, but the significant point here is how Peppiatt has constructed a stunning majority of the riffs on Onward to Glory to mimic the sound of tanks rumbling over the desert dunes, battle hungry cavalcades advancing on the horizon, napalm blasts blowtorching steamy jungle villages, and the speedy consistency of automatic weapon fire with brief smatterings of actual machine gun fire, air raid sirens, and fighter jet samples in the background to drive home the point and trigger PTSD responses in active duty and retired military.

The non-enlisted and pacifists reading this will do better to translate the above description/comparison into “hailing from the same school as Asphyx, God Dethroned, Obituary, Incantation, Bolt Thrower, and Hail of Bullets.” Sometimes, the lockstep, mid-pace, martial plod lacks rhythmic dynamics, but is salvaged by a riff sense that’s as heads down as it is adventurous (“Death Before Dishonour,” title track). Once in a while the meatiness of the customary guitar beatdown makes way for surprising melodic moments (“As Daylight Breaks”), and anyone claiming the first minute of “The Sniper’s Gaze” doesn’t sound like a Rob Zombie riff might get shot in the back by their own platoon members, but they wouldn’t be wrong. Other treasonous claims: Onward to Glory isn’t likely an album you’re likely to throw on very often. It makes for a competent addition to the death metal subset of bands mentioned above, but there’s something about an album in the age of saturation that adheres too strictly to its chosen lane. And doesn’t have solos, which is likely the biggest crime committed here. Still, onward to battle! ~ Kevin Stewart-Panko

ASHES OF ARES: Emperors and Fools