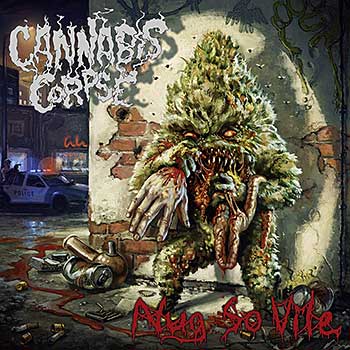 SERIOUSLY FUN DEATH METAL: The interesting thing about Richmond, Virginia death metal stoners Cannabis Corpse is that they are no joke. Well, they’re kind of a joke, as far as their generally amazing albums, song titles, and cover art go, all of which play on classic death metal album and song titles to make them weed-centric. But that novelty can only go so far. Luckily, the band proved pretty early on that their take on classic Floridian death metal has legs of its own, and here on their sixth full-length, Nug So Vile, Cannabis Corpse is just solidifying that sentiment, with songs like the grooving title track or raging opener “Conquerors of Chronageddon” proving the band could be singing about other goofy death metal stuff and they would hold their own just fine. “Blasphemy Made Hash” shows the band’s love of Cannibal Corpse with a bass heavy midtempo track that is technical but not showy and steps up to a brisk two-step with no stumbles whatsoever. From the four count on the snare kicking off “Edibles Autopsy” to the frantic caveman blasting of the amazingly titled “Dawn of Weed Possession,” this is a huge love letter to death metal—and, yes, weed—and proves once again that through all the smirks and chuckles, Cannabis Corpse has become a death metal band to be taken seriously. ~ Greg Pratt