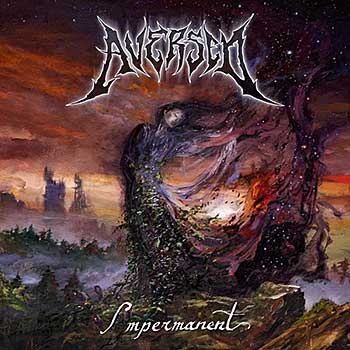 Opener “Natsukashi,” which is a Japanese word, elegantly begins with a soothing and melodic instrumental opening before unleashing a battering of blastbeats, furious riffing, and Irizarry’s vicious vocals. There’s a great mix of her clean vocals, as well as melodic instrumental melodies that add a lot of dynamics to the song’s frantic pace. Follow-up track “Close My Eyes” has a slight commercial and engaging edge to it. The science/biological themed lyrical content of “Laboratory,” most notably dealing with the phylogeny concept, is an educational experience as well as a ripper of a metal track with a Morbid Angel vibe. With the addicting title track, the vivid storytelling of “Abandoned,” and the ballad-esque “Solar Sea”—complete with a music box melody intro—this trio of tracks adds even more flavor to the album’s overall diverse musical arsenal. “Malaise” experiments with some angelic choir-like vocal harmonies and more guitar-driven passages, while the surging “Spiraling” and album closer “Nightshade,” decorated with more choir-like elements, acoustic guitar intro/outro, and fantastic juxtaposed vocals, ends the record in climactic fashion.

The riffs and musicianship throughout Impermanent are very technical, yet the songs have just enough melody to make them engaging and accessible to the listener. Guitarists Sungwoo Jeong and Alden Marchand lay down some blazing riffs and emotive solos, and bassist Martin Epstein unleashes some prominent basslines, while Saltzman is earning a growing reputation as one of the best up-and-coming drummers in the scene. Irizarry has an amazing vocal range. Her growls often times reach the range of Arch Enemy’s Alyssa White-Gluz, Seven Spires’ Adrienne Cowan, or ex-Arch Enemy’s Angela Gossow, while her soaring cleans are very welcome and add a great juxtaposition and dynamic to the tracks. Mixed and mastered by Christian Donaldson (Cryptopsy, The Agonist, Shadow of Intent), with orchestrations composed and arranged by Patrick Logue, including cello arrangements by Eden Rayz, gives Impermanent a diverse and colorful flavor.

Impermanent is a rather long and exhausting album, clocking in at almost 57 minutes. However, due to the album’s diversity, interesting arrangements, and strong songwriting, it’s worth every minute of the listener’s time. Although Aversed’s melodeath formula has been done before, it works extremely well here. Impermanent is a distinct turning point in the band’s early musical career, and Aversed is a modern extreme metal band that is on the rise. ~ Kelley Simms