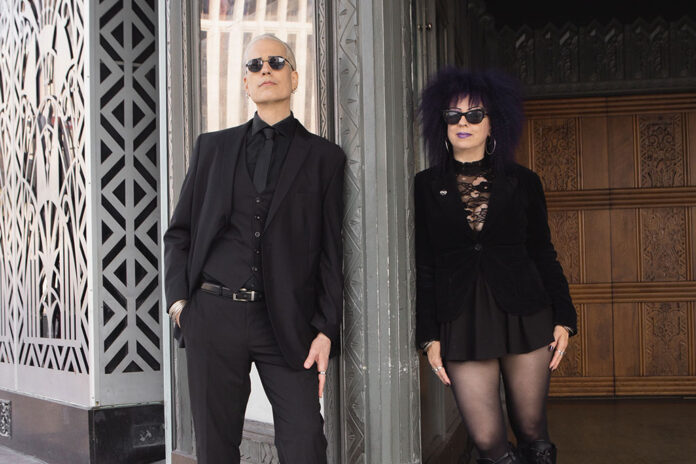 Dark alternative band The Bellwether Syndicate is anything but conventional when it comes to rock music. Formed by William Faith and wife Sarah Rose Faith—with multi-genre experience in seminal goth acts and the EDM world as a well known DJ and club promoter—the band is one of the most unique dissonant sounds in the scene.

“Our relationship and the music are all connected in a sense,” muses William. “Everything was at a crossroads at the end of my previous band, Faith & The Muse. It was coming out of a period where I felt it had exhausted what it had originally planned to do. When we did our last project, I could not see where it was going to be. There seemed to be no next step. It felt like it had creatively spent itself. I remembered thinking, ‘What’s Next?’ or what would follow that. I found that I wanted to get back to something that was more rock based. At the same time, my one true love and I had come to this point to make the next step and be together. So, it all worked out when she asked me, ‘Would you be interested in doing this?’ She always had an interest in this area, and it seemed like the perfect opportunity to take this to the next step.”

“OUR RELATIONSHIP AND THE MUSIC ARE ALL CONNECTED IN A SENSE”

“Music has always been the number one thing in my life career-wise, but also personal interests,” Sarah Rose continues. I never practically thought of being in a band. I always thought of myself as more of a patron of the arts. I dabbled in playing keyboards in a goth band in 1990, which was short-lived. The year before William moved to Chicago, I started thinking about playing guitar. I had never even attempted it, but it was there in the corner of my mind. I think us moving in together, I had the perfect teacher, not only someone I loved personally, but also I loved his musical history and prowess. Learning to play guitar in my 40s is very different from learning in my teens or 20s, like most musicians I know,” she laughs. “He’s a fantastic teacher and very patient.”

While the band falls under the guise of dark alternative, their 2013 EP The Night Watch stretched the potential of how far they would take their sound. A gorgeous, unexampled blend of post-punk and death rock elements, this EP would be the gateway to a new era and single “Dystopian Mirror,” part of their new album Vestige and Vigil. Further broadening and enriching their instrumental and lyrical soundscape with assailing hard-edged guitars, buzzsaw synths, tribal beats, with internal monologues of caustic conviction that showcase one’s personal hell, the creative process was a deep and mature progression of their work as seasoned musicians in the scene.

“THIS IS ABOUT A FRIEND OF OURS, WHO OVER SOME TIME LOST HIS MIND AND EVENTUALLY HIS LIFE TO HEAVY BURSTS OF DRUG AND ALCOHOL USE”

“It’s difficult to separate one from the other,” William begins. “They are both very much intertwined, one informs the other. It builds on top of one another in a sense. Interestingly enough, with the lyrics, once I knew what we wanted to talk about on this album, the music came from that. This is about a friend of ours, who over some time lost his mind and eventually his life to heavy bursts of drug and alcohol use. This person was also in a band and someone who we were close to. I found a riff we would use around that idea that would be the reoccurring motif. It was suggestive of something that came out of that band. We took inspiration and influence from that and rejigged it to the reoccurring motif and the song, with the intent of making this slightly evocative of that but still refigured and chewed up back into it. It’s not immediately obvious. You would have to be in our minds for it to make sense. I wanted something in our case that suggested a specific atmosphere. In the way it came out, it does. It very much puts you in his world.”

There is a subtle duality that shows within the new single, “Dystopian Mirror.” The loss of one’s mind to eventually one’s life bookends an important aspect of Vestige & Vigil. In an era that is on the brink of constant turmoil and pain, Vestige & Vigil offers a view of the world from two perspectives. Vestige—a celebration of what remains—and Vigil—an acknowledgment of what’s been lost. While Vestige & Vigil takes us through this emotionally mediative journey, the ideas behind this track and others that will follow were not as definitive during the creative process.

“It’s interesting, there is what you think you are going to do and there is what you wind up doing,” William warmly replies. “When we were going in to do this, we had an image of what Bellwether is. Part of the idea is we generally have some political themes to what we do. That was where we thought this was going to go. So much has happened in our lives and in the intervening years, all of the sudden, the content got super personal.”

“There is still some political content on there for sure,” Sarah Rose laughs. “There are comments on the current state of things and society and stuff throughout the album, but the personal nature within the lyrics came out far more than we had anticipated.”

MACABRE: Pogo On A Stick