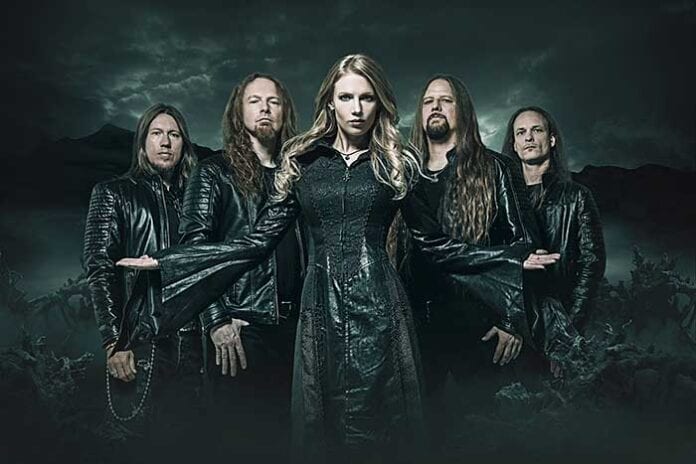 Leaves’ Eyes continues its take on folky/Scandinavian symphonic metal on its fantastic eighth full-length release, The Last Viking, which is a concept album about Norway’s King Harald III, called Hardrada (the hard ruler), and the Vikings’ decisive last battle in England near Stamford Bridge in the year 1066.

On cult albums Vinland Saga (2005) and King of Kings (2015), Leaves’ Eyes already turned Leif Eriksson’s discovery of America and the life of Norway’s first king into music. Now, Leaves’ Eyes brings the Viking sagas to their bombastic conclusion. The seeds for The Last Viking were actually first planted on the band’s previous album, Sign of the Dragonhead (2018), with the track “Waves of Euphoria,” which introduced Hardrada. The Last Viking is the epic cinematic soundscape into the mythical world of Viking adventures.

Ms. Siirala recently spoke with us about The Last Viking, replacing Liv Kristine, and the band’s future plans amidst the uncertainty within the music industry due to the Coronavirus.

Besides tour cancellations and show postponements, how has this worldwide pandemic affected the band?
Luckily, not so much! We had to postpone the video shoots, which affected the schedules, etc., but all recordings were done according to plans.

Tell us about the new album, The Last Viking. How did you come up with the concept? Is it based on a true story?
Alex came up with the concept already when we were finishing the previous album, Sign of the Dragonhead. The song “Waves of Euphoria” was already hinting at what’s coming and he said the next album would be about Hardrada. And yes, it’s based on his life, which is pretty incredible and makes a great concept.

How did you approach these songs, singing-wise?
I wanted to bring out the character of each song, and there are very different kind of songs on this album. So, it was a lot of fun bringing all these sagas to life.

Was there a huge amount of reading and researching involved? Did you follow closely to the narrative and historical accounts of the story?
The concept and lyrics are Alex’s area, and this album is, of course, inspired by Hardrada, the Last Viking, as after his death the Viking era came to an end. Alex was doing a huge amount of reading and researching for this album, and he likes to stick to the historical facts as they are already exciting enough!

The Last Viking was produced by Alex Krull and Thorsten Bauer. What was the band going for sound-wise compared to last album?
What’s unique about this album, is that since all the different stories are made into songs, we were able to bring the different characters of each saga to life. It was done by using some very special instruments and, of course, the cinematic side and epicness is there all the way through. It’s also still a very song orientated album, and the essence of the metal band has to be in the center with the drums, guitars, etc.

There’s use of various Mediaeval instruments, such as the nyckelharpa, fiddle, and Celtic horns. Were you just looking to add spice to diversify your sound? How did these ideas come about, and how did you know which songs they would fit in?
Leaves’ Eyes has always used various Mediaeval instruments in their music, and on this album it was the character of the song that defined which instruments would fit in. They always bring this extra little addition to the sound, which is great!

“ON THIS ALBUM IT WAS THE CHARACTER OF THE SONG THAT DEFINED WHICH INSTRUMENTS WOULD FIT IN.”

With cover artwork by Stefan Heilemann, what is the concept and how does it tie in with the theme/songs/lyrics/image?
It’s our interpretation of the death of Hardrada. He actually did die on a battlefield with an arrow to his neck, but we created the scene with a Valkyrie who’s lifting him to Valhalla.

Obviously, you were Liv’s replacement in 2016. By now the longtime fans have accepted you, but was there a bit of apprehension or nervousness first joining the band?
There was, of course, some nervousness, but more for the reasons that I wanted to do my best as the new singer. I know I’m a completely different person, singer, and performer, so I knew from the start that I’d have to make my versions of the songs. There’s always going to be division of opinions, but if I feel that I’ve done the best I can, then it’s enough. I’ve felt very accepted by the fans from the start.

The Last Viking is a long album at over an hour. However, it flows well like a movie, it’s very cinematic. Were you at all concerned about the album’s length in this short attention span era of fans?
I think as it’s a concept album, it needed to be complete and make sense. So, as it ended up, we needed it to be a bit longer for that to happen. I believe that as it’s such a varied album and goes from another adventure to the next, it will be exciting for people to listen to.

Speaking of cinematic, how did the original film documentary Viking Spirit come about?
That’s Alex’s project he was working on for years, and it shows a very interesting insight to the re-enactment scene through many interviews and, of course, him as the musician and sword fighter.

On the track “Black Butterfly,” how did you get Clémentine Delauney (Visions of Atlantis, Exit Eden) to guest sing on it?
Clementine is a good friend of ours, and it was great that we were able to organize the duet during these uncertain times. She was at the Mastersound Studio and recorded her parts, which sound great! We wanted someone with a different type of voice, and I think her voice blends with mine, but also brings another character to the song.

Due to this ongoing pandemic and the uncertainty of concerts and touring, what are you your plans for the future?
Everyone, including us, is trying to find ways to keep going, and we hope there will be some possibility to play the new songs live in some form. Our tour is now postponed until the new year, and let’s hope it will be possible to plan something in the near future!

ACCEPT: On A Mean Streak