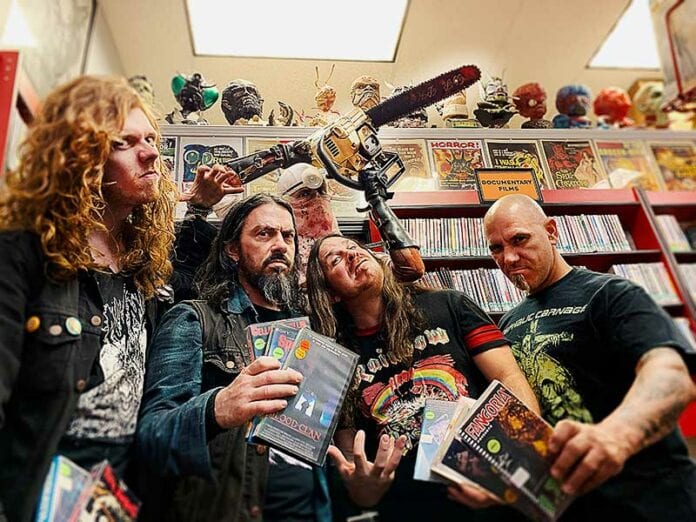 To paraphrase Spinal Tap’s David St. Hubbins, “There’s a fine line between clever and stupid.” The idea to release a short, 26 minute album titled Horror with VHS inspired cover art could have exploded in the face of a lesser retro thrash act without the pedigree and experience of Exhumed. Thankfully, Matt Harvey and Co. have all the bases covered with their seventh full-length, an absolute ripper of a record that strikes like lightning with riff after devastating riff. Horror feels right at home alongside the more complex examples of Exhumed’s creative oeuvre, such as 2003’s Anatomy Is Destiny or 2017’s Death Revenge. The album feels tight and vibrant, with a no bullshit energy that speaks volumes to the band’s pedigree as one of extreme metal’s most reliable voices. We got in touch with Harvey to talk horror shop, and this is what transpired.

The first thing I noticed when listening to Horror was the running time. When I see a short album, two things come to mind. I either get nervous that the album has a lack of ideas, or in this case, I compare it to Reign in Blood, in that it’s under a half hour, but you can listen to it over and over.
(laughs)Awesome! Well, this record only really does one thing, so to stretch out the running time would’ve been repetitive, I think. We wanted to keep it at a point where it made sense, rather than filling up a CD where you only like the first 25 minutes before getting bored. With this kind of music, even if it’s great, you can zone out after a half hour or so.

Anatomy Is Destiny might be my favorite Exhumed record, and these albums couldn’t be more different, but both are clearly Exhumed right from the get-go. Was it difficult to keep things shorter and punchier with regards to arrangements?
I don’t know if it was more difficult, but everything is sort of a reaction, and there’s definitely a box that the band lives in, stylistically. I think that on the last album, Death Revenge, we pushed that sound to the outer limits of where it could go in that box. We were as extended as we could be without fundamentally changing what the band was about, so this was retreating to the opposite corner, pulling back, and stripping away everything. The writing process is usually pretty easy at this point once we get an idea going, however. I had a few songs written while I was still doing the Expulsion project with Matt Olivo, songs that didn’t go anywhere when I was contributing music, so they were sitting around as a good start. We rearranged them a bit and went from there to do something that was the opposite of Death Revenge. We have seven records now. We can’t be cranking out the same thing without it getting boring for the listeners, the audience, and us. We have to find a new take on it each time.

“THIS WAS RETREATING TO THE OPPOSITE CORNER, PULLING BACK, AND STRIPPING AWAY EVERYTHING.”

Was the idea behind Horror, then, to strip everything down to bare basics? I don’t think there’s a song on here that runs over three minutes, but nothing seems wasted. It just goes for the throat every time.
(laughs)Yeah, that’s what it is! The last record was about adding as many layers as we possibly could, while this one was about how few elements you could have, while still having a song that’s interesting and compelling. They still sound like a song, structurally, but it’s all about reduce, reduce, and reduce!

The art of songwriting has always seemed to be important when it came to bands like Exhumed and Impale. That old school metal feeling is there, while also having hooks, bridges, and strong choruses.
It is to me, definitely. It’s my primary importance, but that might also be because I’m sort of a lazy instrumentalist? (laughs) I’m more comfortable trying to strain my mind, than my hands. I’d rather focus on songwriting than the technical aspect of playing. I’m more fascinated by the compositional side of things, not just with what we do, but with music in general. That’s what gets my dick hard, not who’s doing the fastest drum roll or sweep arpeggio. That doesn’t really do much for me, but hearing something that’s cleverly put together and has a hook, paying attention to musicality as opposed to technicality, that’s where I’m at.

Even on Anatomy Is Destiny, that songwriting was there, even if those arrangements were chock full of more riffs than Horror.
Right, and that’s the thing that we latched on to right before the first record. We wanted to find a space that only we would be doing, because there was a lot more technical stuff going on at the time, like Nile, or the slammy stuff like Dying Fetus. Not many bands were cranking out three verses, three choruses, and a bridge, you know? Here’s an instantly recognizable song, as opposed to a riff labyrinth, which could be really great if you’re good at that kind of thing, but it’s not the way I think.

Do you think that fans have come to expect being able to go back and forth between these two lines of thinking, such as the differences between Horror and Death Revenge? There’s no push back from Exhumed fans, I think. It all sounds like Exhumed to us.
(laughs) Well, that’s good! Having continuity is good, and it’s also a lot different from when I was growing up listening to stuff in the late 80s and early 90s. Genres have been really blurred now, and bands have experimented so wildly that our oscillations are pretty tame. Just look at the differences between something like Napalm Death’s Utopia Banished versus Fear, Emptiness, Despair? Talk about a wild directional change! The only thing that sounds the same is some of the riffing sensibilities and Barney’s voice, but otherwise it could totally be two different bands. So, I think we’ve always been more stylistically conservative, because I’ve always been one of those kids who got really angry when bands would change their style, or even their logo! I’d find it personally upsetting when I was 15! (laughs)We never wanted to be that, but at the same time, it’s hard to maintain a balance between finding that consistency and trying to keep it interesting so it’s not monotonous.

That’s the sort of stuff that us, as metalheads, have been debating for decades. Subjects like Death changing their logo, or a band like Carcass, who moved from Reek of Putrefaction to Heartwork to Swansong.
At the same time, that’s what made things interesting back then, because you didn’t know what to expect. There was a sense of newness to extreme metal at that time, where you could go to a record store and be completely shocked, whereas now there’s so much history in the rear view mirror. All of these records are 20 plus years old, and we know all of the parameters that have been stretched, re-stretched, and re-imagined. There’s less potential for surprise for the listener. Today’s fan knows so much more about everything, especially with streaming services and instant information. It’s much more difficult to pull off a shocking transition that’s going to be effective. On one hand, it’s great for the fans, but it also hijacks a band’s ability to pull off a stylistic twist.

Is it more risky for a band to pull off a switch like a Swansong from Carcass or a Diatribes from Napalm Death?
I think it’s less risky, because there’s so much product out there and access to product. It doesn’t matter if you live in New York City or Missouri, you don’t have to worry about your local record store stocking certain records from Earache or Roadrunner. Nowadays, if you don’t like a record, there are a million other similar bands occupying the same space. If you don’t like the last Morbid Angel album, then just look literally anywhere else to find something that will keep you happy until the next Morbid Angel record.

Do you find that you get a lot of younger fans that have discovered Exhumed via this method, as well as those who have been around since Gore Metal and Slaughtercult?
It’s a pretty good mix. We tour with a lot of different bands, from The Black Dahlia Murder to Revocation and Municipal Waste. It’s not just your typical grindcore and death metal bands that we’d fit right in with. We do stuff that hopefully finds some crossover, because you always want to see younger kids at a show. That means your band is growing, even if as you grow you also have those middle-aged dudes like me who stand in the back and spend their money on beer instead of shirts! (laughs) You need those kids to keep things vital and to keep that energy going. Without that, you’re just treading water, and the death metal genre isn’t big enough to keep viable while just treading water.

As a horror fan, I appreciate the vibe of Horror. A lesser, retro thrash sort of act could’ve devolved something like Horror into self-parody by soaking it in samples and tongue-in-cheek song titles, which could be cool, but it wouldn’t have the atmosphere that this album possesses.
Anyone who’s spent any time around us knows that we’re not grim or sullen or dour. We like to have a laugh and party, and we’re not downbeat folks. So, there’s always a bit of humor in what we do. Even on the more serious stuff, it’s supposed to be fun. It’s something that should have physicality, to get the blood flowing. It’s definitely not something where you should cross your arms and talk about how much you hate everyone. It goes along with the splatter movies I grew up with. To me, it was almost cartoon violence. It was so over-the-top and unreal, that you have to laugh about the extremity of it all. That’s where we’re coming from, and it’s not a sense of humor that appeals to everyone. It’s not as if we don’t take what we do seriously, or don’t try and do the best job we can, but we also know that we’re playing death metal songs about rotting corpses. It’s not the most artistic endeavor out there! (laughs)