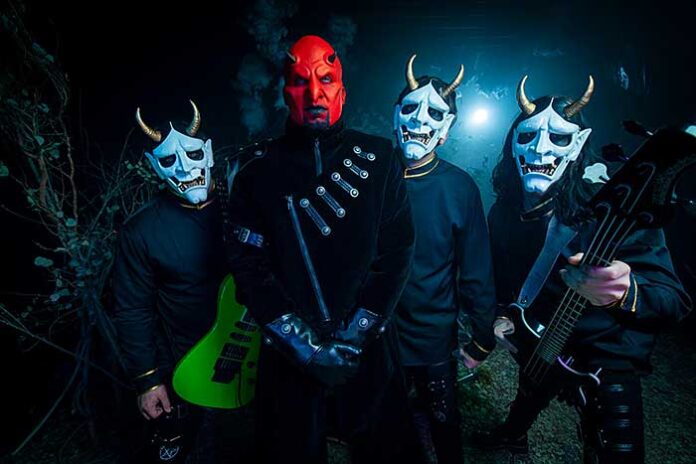 Co-founder of Five Finger Death Punch and the band’s former drummer, Jeremy Spencer began working on a solo project under the name Psychosexual. As the project evolved with additional members and heavier metal elements were mixed into his new wave influences, Spencer renamed the band Psycho Synner to better align with the new musical direction. Working their asses off during the pandemic, Psycho Synner recently released nine full-length albums—yes, nine!—on the same day. We spoke to Jeremy Spencer to figure out how this was done and what is looming around the corner for Psycho Synner.

You have been working like a madman.
Definitely have been working like a madman (laughs). It’s been pretty much for the past two years, five days a week, writing and recording. It really hasn’t stopped because the pandemic fucked everything and we couldn’t play shows. Once there was a chance to play shows, everything was already booked because people were booking shows that were booked and canceled before everything. So, it was like, why even try right now, we’ll do that later, and just work on some music, and that’s what we did.

Can you give a brief background on Psychosexual, how the band came about, and what the renamed band Psycho Synner sounds like?
Psychosexual was something I started on my own, recording solo synth bass/new wave style recordings. It had more sexually charged lyrics in the beginning part. Once I put the band together, it started turning into something more sinister and dark with the guitars. The Psychosexual name didn’t fit anymore, so we’ve changed the name to Psycho Synner. We’ve been in the woodshed writing and recording for the last two years because of the pandemic. There was nowhere to go. So, I was, “Let’s stay in the studio and work, and we’ve come up with nine albums.”

“ONCE I PUT THE BAND TOGETHER, IT STARTED TURNING INTO SOMETHING MORE SINISTER AND DARK WITH THE GUITARS.”

Nine albums? That’s incredible.
Yeah, it’s definitely a lot, and we did it in two years because of the time with the pandemic. We still would have been writing and recording, but I doubt it would have been that intense of a schedule. But we loved it! Once it’s not enjoyable and starts to not be cool, then we don’t do it. I don’t need to do it. I came off of something that did pretty well in the music business in a time when we were fortunate to have people who would buy our records. That’s not so much these days. It’s a nice perk for future endeavors. I can’t complain, and I’m really grateful I went through all of that stuff. Now I get to do what I want, when I want, and I’m on my timetable. There is no listening to a machine that so many people are reliant on. We are small, in-house, and starting over. It’s really enjoyable and grassroots. It’s fun!

How was it to transition from a drummer to a frontman?
We did a livestream show, and it was a little weird because there weren’t people in the room. There were just seven crew guys clapping, so that was an awkward experience, but I want to get out and play for real in front of an audience and get an instant exchange and feedback. We’re planning on doing that maybe early next year. It’ll be whenever the right opportunity presents itself. It’s time to get going on that, we’ve made a lot of music, and it’ll be a lot for people to go through and find the vibe they like. We made a different record each time, not the same stuff on each album—that works for some bands, but that’s not stimulating to me. I’m excited for people to hear it. Some people won’t get it, some will dig it. You can’t please everyone and that’s fine. You have to please yourself as an artist. It’s unrealistic for everyone to connect. If the band and I are digging it, that’s all you can control. You hope someone will connect with it and say, “Yeah! I dig it and we’re fans now!” But if not, that’s okay. We’re going to keep creating, writing, and enjoying the process. That’s what life is supposed to be, enjoying what you do, in my opinion.

“I WANT TO GET OUT AND PLAY FOR REAL IN FRONT OF AN AUDIENCE AND GET AN INSTANT EXCHANGE AND FEEDBACK.”

What initiated the change from Psychosexual, and what’s the vision for the future of Psycho Synner?
We’d grown out of the early style lyric content, and it kept evolving. A lot of bands’ first album isn’t what they end up being. They are still figuring out who they are. There are snapshots in time, and that was real quick. We’ve done 23 other things since then, so why don’t we start over and do it where this is going now, and it grew a life of its own real fast. It made sense to rename it and relaunch it and see where it goes.

Tell us about your new alter ego.
It’s tough to come up with cool names, and I thought Grym Synner was a cool name. I mean, what good names are available? They’ve all been used to death. So, I’m like, “Cool, Grym Synner. I’ll do that!” That’s all the thought I put into it. Why get hung up on a name? What is a name? Music makes your name cool.

“IT DOESN’T MATTER WHAT BAND YOU WERE IN BEFORE, THIS IS NEW AND YOU START NEW”

Will it be the same look and aesthetics live?
It’s going to be as over-the-top as we can make it on day one, budget and tour depending, along with play slot. If we are playing the 6:15 opening slot, maybe we won’t have the KISS production (laughs). We’re going to bring as much stuff as we’re allowed to bring. Obviously, we have to earn our stripes—we’re a new band. It doesn’t matter what band you were in before, this is new and you start new. We’re totally fine with that.

Which songs of the many on the nine albums standout to you?
We put up some songs initially and we kept writing. This song “Devil from Hell” came about at one of our sessions. This is way more of an appropriate introductory piece to the band. This is part of what spurred the start over. We scrapped the initial recordings and started with “Devil from Hell.” It ended up going number one on radio charts. Then we did a follow-up single called “Unholy,” which also went number one. We have a new single called “Love on the Grave,” which is one of my favorites. Kind of gothy, something Type O Negative needed in their catalog. It would have worked really well with their style. The flavor is very metal and goth. It’s us paying homage to Type O Negative. I always really liked that band a lot.

“NOBODY HAS DONE IT. NO ARTIST HAS DROPPED NINE ALBUMS IN ONE DAY. SO, IT HAS TO BE SOME SORT OF UNOFFICIAL WORLD RECORD.”

Will these albums be released at once or slowly over a year or two?
I am dropping all nine albums on the same day! Nobody has done it. No artist has dropped nine albums in one day. So, it has to be some sort of unofficial world record. It’s fun (laughs). It’s a good story to talk about. People are, “Who is this arrogant prick releasing nine albums?” It’s not like that. I just got tired of releasing a song and waiting two months to release another song. I want to get some product out there and for people to soak in the vibe. If I discover a new band, I want to hear everything they’ve done. When I first heard Ghost, I was, “Shit, they only have nine songs. I wanna hear more now!” We are consciously doing this differently. Let’s bombard and let the people discover whatever they want. Each album has its own title, its own album art, and all different gambits of style. That’s important to me to have them different from one another. I don’t like getting into a repetition where you’ve heard that style the last seven records. It works for some. AC/DC has made the same album every time, and it fucking rules, but for my stuff, it’s not stimulating. I do snapshots in time of what we’re feeling in that moment in time. You document it and move on.

When you first started, you were doing a lot of 80s synth and pop. Can we expect any of this?
There may be a flavor or two in some of the stuff, but most of it is in the past. I made four solo records that may or may not see the light of day, a totally different style like DEVO meets Prince and Duran Duran. It’s 80s new wave that I grew up with. I was always a fan of that stuff.

The amount of work you did over the pandemic is impressive. What kept you motivated and creating?
We were fortunate enough that no one in our camp got it. We were in our studio bubble, plugging away every day. We were in our cocoon doing what we do until the pandemic shit is out of the way and we can play shows again. Until then, let’s just write. We could stay on the road for years with all the material we have now, but we won’t (laughs). The records were our driving force each day to not think about the madness out there. We’ve been working our asses off for our fans. I don’t need to do it, but I want to do it. It’s what we love to do. I’m excited to see how people react to the new songs and videos.

The albums are available here.
Fans that purchase all nine albums at this location will also get the digital covers EP, Songs to Stalk You By, for free.

GHOST: The End of Cardinal Copia and The Future of Ghost

THE OCEAN: Explosions and Extinctions