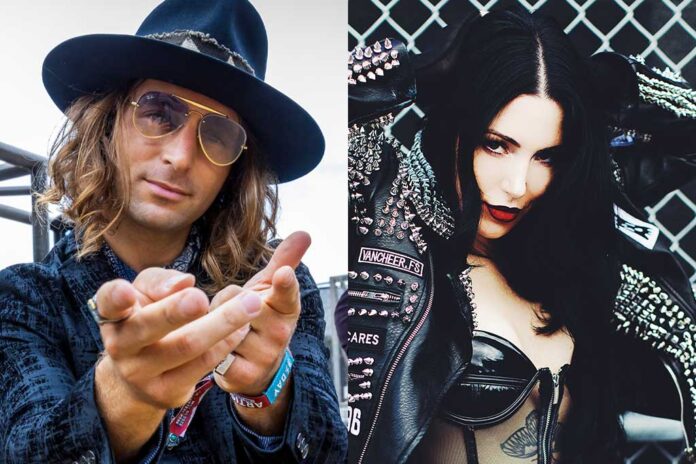 Dirty Honey and Dorothy, two bands that have exploded onto the rock scene, are hitting the road together this month on the North American “California Dreaming” tour to prove that rock is absolutely not dead. Before they jumped on their respective tour buses, we got Marc Labelle and Dorothy to answer five questions for Outburn. Check out the full itinerary here.

How did you get introduced to music when you were a kid?
Dorothy: I got introduced to music as a kid by my stepfather who had a really large vintage vinyl collection. He had everything from Motown, Bob Dylan, Peter, Paul and Mary, Simon & Garfunkel and Janis Joplin, to Pink Floyd, Michael Jackson, Prince, and Bob Marley and the Wailers. There was such an eclectic selection of music, so I grew up listening to a lot of Motown and oldies. When I started to want to sing, I was listening to Dolly Parton and Dixie Chicks, and a lot of country music. And then I really got into classic rock and 80s hard rock and 90s grunge alternative—Nirvana, Soundgarden, Audioslave. I just wanted to sing. I don’t know why, I just really wanted to sing. I had a lot of music around me. No musicians in my family, like none at all. I don’t come from a musical family at all.

Marc: A lot of it came from my dad and my stepdad. They both, for whatever reason, really liked Aerosmith. Specifically, my dad had Permanent Vacation and my stepdad had Big Ones and I think Toys in the Attic, and that was really my first love. Toys in the Attic is the one I gravitated towards the most. It had this classic, really mysterious sounds in a lot of it. Permanent Vacation is a more straight-ahead 80s sounding rock record, and Toys had this really cool 70s style to it, and obviously the intro to “Sweet Emotion” is magic. But that’s the thing I gravitate towards the most, and then diving into my dad’s and stepdad’s CD collections. It was Stones, Tom Petty, Bryan Adams. I specifically remember my dad laying down on the floor listening to the middle section of “Whole Lotta Love” and feeling that panning effect, and thinking that was the coolest thing ever. I have very fond memories of listening to music as a youngster.

Dorothy: I agree, and I know Marc loves Aerosmith and I do, too. Steven Tyler is one of my favorite vocalists because there’s no one on the planet like him. There really isn’t.

Marc: I agree. I recently discovered this video of him singing “What It Takes.” I think it’s in Japan, and I might go out on a limb and say it might be the greatest vocal performance of any song I’ve ever heard. It’s so nuanced and it’s diverted slightly away from what he put on the record. He’s killing it so hard in this specific video. It is amazing how good he sounds.

Do you have a regiment on tour or at home that helps keep you fit and centered?
Dorothy: At home I have to keep my recovery first. If I slip on that, it’s not good. Recovery, going to meetings, definitely working out, it makes me feel productive when there’s less things going on. I look at myself like I’m constantly training for a bigger tour, and we’re going to end up in a stadium, so I need to take care of my vessel. I go to church, I go to a women’s prayer group, and it’s really inspiring to hear their stories of how they’ve overcome things. I do my weekly check-ins with management, labels and try to stay creative. I’m starting this movie project in between writing, so when I’m in album writing mode, that’s specifically all I do. I write with different camps. I’m writing and collecting different songs for an album, and then recording, doing all that. And when we’re in touring mode, a few weeks before that, I go to the gym, take care of myself, get all the things I need, packing. I’m a neurotic packer. I pack way too early because I don’t want to forget anything, and then we go on the road. The road becomes a routine. I know that Mick Jagger is super strict with his regiment, what he puts in his body, how much sleep he gets, working out, warming up, getting ready, and then not talking, all that stuff. So, the road becomes like Groundhog Day. I like to be adventurous and have fun and go see things, so I’ll get off the bus and put my bluetooth headphones on and I’ll run. I’ll jog by the water or through the town and go try to see something cool and take pictures. I’ll find all sorts of cool things, museums, rock gardens, botanical gardens, bodies of water, and I map my runs, so that’s how I start my day. Then getting food and getting ready for the show, and lots of sleep.

“I LIKE TO BE ADVENTUROUS AND HAVE FUN AND GO SEE THINGS, SO I’LL GET OFF THE BUS AND PUT MY BLUETOOTH HEADPHONES ON AND I’LL RUN.”

Marc: I bring a bicycle out on the road with us and usually that’s how I start my day, riding to whatever the best coffee shop is in town and go experience that. Then I’ll find a good meal somewhere, workout, check out the town we’re in. It totally depends on what city we’re in. It’s going to be great up in Canada. I can’t wait for these days off. Outside of Calgary, I’m going to go hiking, and I want to go hiking in British Columbia. You want to use the time that you have wisely to experience wherever you are. Ultimately, I don’t envy the Slash and Axls of the world where they’re so famous that they really can’t go out and do the things that they might want to do. I don’t know what they want to do, but I know that I would like to be able to go out without 1,000 people knowing who I am and wanting to get pictures. Just getting out there to experience the city and being open—I say, “Yes,” a lot when I’m on the road.  People want to show you something about their city, especially abroad, that you wouldn’t otherwise know about. It’s always an interesting avenue to go down that leads to some cool stories and really fun nights.

What keeps each show fresh?
Marc: It’s the fact that every audience is different, they give you different energy. Depending on what they’re giving to you, they can totally dictate how the show goes, and then, just as an artist, you want to perform at your best every night. There are always people who are seeing you for the first time, and you want to make sure they leave knowing they saw something special, so that’s enough motivation for me to bring my best every night.

Dorothy: We have an opener or headliner setlist as a template, but it tends to change every night or every few nights. Depending on the vibe of the audience or maybe how my voice is feeling at the time, I might take out some of the harder ones and replace them with something a little more easy. Sometimes we’ll just switch it up, but there’s good and bad. You might get bored of the same thing all the time and just phone it in, but also, practice makes perfect and your muscle memory locks in and then you’re just super tight and it’s a no-brainer. It just depends. If I get too bored with something or feel a certain way, I’ll switch the songs up for sure.

“AS LONG AS YOU’RE EXPRESSING SOMETHING THAT PEOPLE CAN CONNECT WITH, IT HAS THE POTENTIAL TO LIVE FOREVER.”

What is it about rock ‘n’ roll that’ll never die?
Marc: It’s its own unique form of expression. That’s like saying, “Music will never die.” Any great song has the potential to live forever, and rock ‘n’ roll is no exception. As long as you’re expressing something that people can connect with, it has the potential to live forever. Rock ‘n’ roll is relatively young in the grand scheme of music. It’s already spanned six generations or maybe seven decades of human history. I think it’s as strong as ever. We did a stadium tour with Guns N’ Roses, it doesn’t get any bigger than that. So, it doesn’t seem like it’s slowing down anytime soon, but so long as you write something that connects with people and allows you to emote and give words to people who don’t have them, you’re filling a void that exists.

Dorothy: That Elvis movie that came out by the way is amazing. And here’s the proof, Metallica in Stranger Things. Now, 11,12,13 year olds are discovering Metallica for the first time, tell me rock is dead. I know I named my first album that, but I was being sarcastic. Tell me rock is dead when Metallica is in the biggest show on television. That’s a good sign.

What are you looking forward to most about the California Dreaming tour?
Marc: Touring America is always great, but growing this thing and watching it grow is really cool and sharing the stage with another artist that we like and obviously have a connection with, that’s going to be fun. And the new guys are going to bring some fun energy to the entire tour. I’ve heard that they like to get after it a little bit. It’s always fun to create a new touring family. It’s going to be sad to go through these next couple months and create these great connections that last a lifetime, and then watch them come to a screeching halt when the tour inevitably ends.

Dorothy: Yeah, but we’re all around LA so it doesn’t have to end!

ENTER SHIKARI: A Sense of Community and Beauty

BEWITCHER: The Moon, The Cross, The Witch