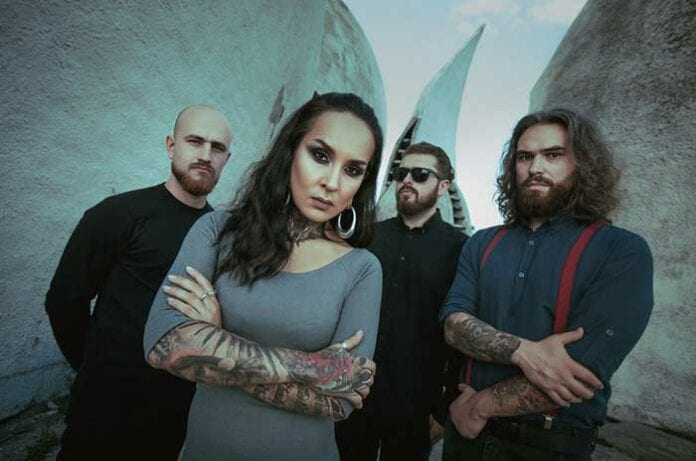 With the band’s third full-length album Macro out on Napalm Records, Ukrainian extreme metal band Jinjer pulls inspiration from within while speeding forward on the road to success. We spoke with bassist Eugene Abdukhanov on what it feels like to be “On the Top” amidst their almost completely sold-out headlining US tour.

How is your morning going? You play in Cincinnati tonight, right?
I haven’t left my bunk yet. I haven’t seen anything around, but as far as my GPS, it says we are in Cincinnati.

You’re currently in the US wrapping up a sold-out North American headlining tour, which comes only a year after the band’s first ever tour of the States supporting Children of Bodom and DevilDriver. How does that feel? How has that momentum influenced your live performances?
Of course, it feels great. I wonder if someone in the world being a musician could say, “No, it’s terrible. I can’t stand this.” We are very excited about all the sold out shows and huge crowds waiting for us every time we go on stages.

What’s been one of your favorite memories so far from the tour?
I really enjoyed playing the Taco Party. If we’re talking specifically about shows, Montreal and Toronto were above all expectations. Those two huge Canadian shows definitely stand out. New York was awesome, all of the Texas shows were awesome, and Los Angeles, playing at the Whisky a Go Go, a small venue but super exciting to play. Not that the other dates weren’t great, but those I mention definitely stand out.

Taco Party, that’s the show you did for Jose Mangin. Were you familiar with him prior to playing the show? How did it all come together?
Yes, we met him a year and a half ago in Los Angeles when we were on tour with Cradle of Filth, and he hosted us very well and had us do an interview for Liquid Metal. Then we met again last summer at Download Festival in the UK. So, this time, with us coming over with this huge tour, he offered the opportunity to exclusively play two new tracks on a small stage at the Liquid Metal studio, and, of course, we agreed. It was wonderful. We had a really good experience there and met wonderful people. That is definitely one of the standout moments for me personally.

“YOU NEVER EAT BEFORE GOING ON STAGE UNLESS YOU WANT TO THROW IT ALL UP ON PEOPLE.”

Who in the band ate the most tacos?
We didn’t eat any tacos! The problem is that we were on stage when they were being served. You never eat before going on stage unless you want to throw it all up on people. And after you get off stage you’re sweaty, you need to change, and all these things, so we ended up missing out on the tacos.

Have you gotten any time to explore any of the cities you’re in on this tour?
We have days off, and every day off I do my best to go for a drink. I just do sports, well, martial arts. Anytime I have some free time I look for a gym near me on the internet and try my best to get there.

Your new album Macro is out Napalm Records. What was the most challenging aspect of writing and recording this album?
I don’t see any challenges. I just write music.

“THE MAIN GOAL IS TO NOT BE THE SAME ANYMORE WHEN WE LOOK AT OURSELVES AND TO TRY AND GO AS FAR AS WE CAN FROM THE PREVIOUS RECORD.”

What were some of your biggest influences for the album, whether it be other music or personal?
The thing is, this is our third full-length album, and apart from those full-length albums we also have a number of EPs out. I believe at this point we’ve managed to create our own sound, even if we change styles or genres. So, now the biggest influence we have is actually us. The main goal is to not be the same anymore when we look at ourselves and to try and go as far as we can from the previous record. This is the biggest influence we have. Everything else is just pure inspiration and creativity, which, of course, has no obvious challenges. If you have inspiration, you write. If you do not have inspiration, you do not write. And this is the simple truth of being an artist.

If you had to describe Macro in five words, what would they be?
Definitely extreme. We cannot deny this is extreme music. So, extreme, progressive, diverse, groovy, and smart.

Is there anything else you’d like to share?
Usually when people ask me this question I’m a bit stuck because I wish I could share everything with you and all the classified info, but I’m afraid I’d have a bit of a problem with my managers if I started talking about things that haven’t been announced yet or anything like that. So, in this case I just keep saying I am sharing with you all the peace, love, and harmony of this world.

SABATON: The War to End All Wars