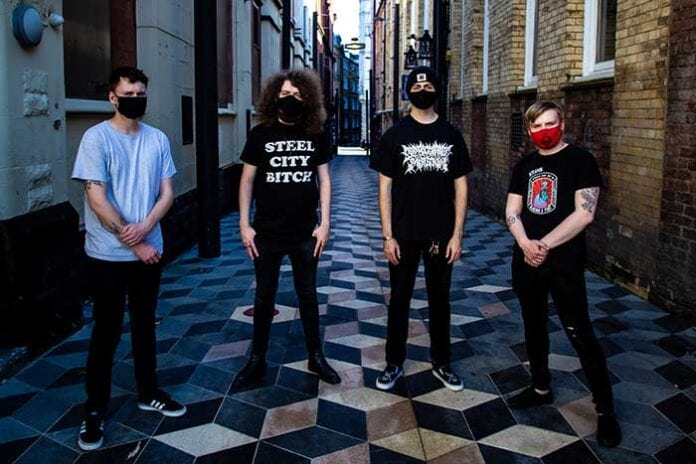 LISTEN TO WINTER HOTEL’S VACANCIES WITH A TRACK BY TRACK BY THE BAND ONLY ON OUTBURN.COM

As the opening chapter to Vacancies, “Lovers at Bay” effectively served as an introduction to who we are as a band. Instrumentally, “Lovers at Bay” points towards the varying spectrum of influences that make up our sound with broad and heavy breakdowns being intertwined with melodic lead lines.

Lyrically, “Lovers at Bay” is a narrative that was inspired by the coastal location of Bangor, North Wales in which the band was based at the time of it’s writing. The surrounding seas, docks and beaches in addition to the rolling hills and mountains provided the basis for this song about being lost and in love beneath the vastness of the open sea.

The lyrics of the second chapter of Vacancies “19” stemmed initially from a piece written as a form of therapeutic expression during times of severe depression. We aimed to capture the essence of the destructive feelings displayed in the lyrics by complementing the sensitive nature of the song with the appropriate emotive and flowing instrumentation.

In order to remain consistent with the subject matter described by the lyrics, “19” became one of our less heavy songs instrumentally in order to capture the weight of emotion being dealt with. However, “19” has become one of our most energetic songs despite being one of our lightest and always receives an electric response from our audiences.

With our third chapter, “Waste” featured on the Slam Worldwide YouTube channel, which is a platform well known and respected for being a host of some incredible slam, death metal, and deathcore bands, we were incredibly honored to be as well received by that audience and community as we were. As “Waste” is a formal representation of the heavier side of our sound, having our name listed among many of the bands which inspired it prompted not only a feeling of pride, but a sense of our love for the extremes in metal coming full circle.

As a song about the misery and horror war causes to humanity, “Waste” was written on the fundamental truth that whether one deems that war can, or cannot ever be necessary, it is undeniably devastating. Consistent with the carnage described in the lyrics, “Waste” is one of our most brutal songs to date.

“The Exorcist’s Daughter” is a song written about the experience of having to make the difficult decision to walk away from a dying relationship due to the other person’s “demons” causing them to go down a path of self-destruction that they can’t be diverted from. Dealing with feelings of guilt, self doubt and moral confusion, it asks the question of at which point must someone make the decision to allow a person to destroy their own life rather than continue to try in vain to help them and face being dragged away into the darkness beside them. It is a story told against a backdrop of a horror narrative drawing on demonic and occult imagery alongside our shared love of horror movies and literature.

With “The Exorcist’s Daughter” being our first performance based music video, we aimed to capture the eerie and desolate nature of the song’s narration through the setting of a former tobacco warehouse flooded with cold, blue lights. It was important to us that the video itself served as an accurate visual representation of what we can offer both as performers and as artists in our journey to create an honest and direct medium through which we can express ourselves, our experiences and the stories we have to tell.

“The Show Must Go On”

“The Show Must Go On” is a song that challenges the existence of people in the music scene who deliberately drain those around them, and try to facilitate the failure of others in order to fuel their own success. The song’s lyrics are written from the perspective of a narcissistic individual claiming to be suffering and romanticising the issues they describe in order to make themselves seem more relatable with no regard to the people who genuinely suffer from said issues. As the final chapter of the Vacancies EP, “The Show Must Go On” is a bold statement that Winter Hotel has only just begun and it won’t let its journey be faltered by those who would lie, cheat and manipulate their way into an audience’s favor.

With “The Show Must Go On” being the concluding chapter of the Vacancies narrative, we aimed to put forth a song that is not only representative of our influences, but a song that will have a lasting resonance with the audience. As we opened with the energetic and dynamic “Lovers At Bay,” we wanted to close with a track that was equally as stimulating but with a bit more force to further drive home the harsh reality of its lyrics and contextual meaning.

Formed in Wales, in late 2017 through the chance meeting of its founding members, UK five-piece Winter Hotel creates a dynamic, hard-hitting, and emotive alternative metal sound that nods to a cross-section of genres. A diverse array of influences and sounds drives the Winter Hotel creative ethic—death metal, Midwest emo, and post-hardcore all showing themselves across the course of the band’s EP, Vacancies.