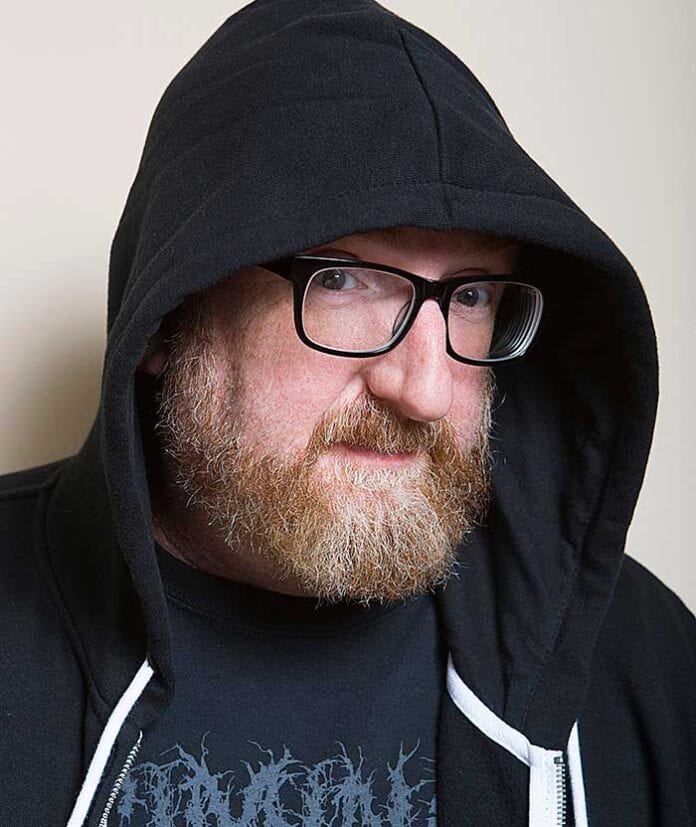 (in no particular order of preference)

ANTHRAX
“I’M THE MAN”
I’m The Man (1987)
This is not just one of my favorite comedic metal songs, it’s one of my favorite songs that Anthrax ever recorded, and it was a surprise at the time, well, not for me, I knew that Anthrax had a sense of humor, but so many metal bands at that time were so serious, and these guys were jackasses. They did these Beastie Boys-type rap/metal songs, that’s the first time I’d heard rap and metal combined and it was hilarious.

SCATTERBRAIN
“DUDE, DON’T CALL ME DUDE”
Here Comes Trouble (1990)
This song, when I first heard it in the 80s, it was so eye-opening at the time, it felt like it was made for me. These guys were heavy and they were kind of idiots…their lyrics were hilarious and they had a couple of…I don’t think any of the songs on the album were serious, but this was my favorite of the bunch, “Dude, Don’t Call me Dude” tells a story about a guy getting his heart broken—it’s just a funny song. I’ve always loved “story” songs, but when the song is also funny and heavy, it’s a winning trio.

SPINAL TAP
“BIG BOTTOM”
This Is Spinal Tap (1984)
I don’t know that this is their funniest song, but it’s the one that everyone knows. I’ve always loved it because…well, once I got a sense of humor about Spinal Tap. When I was real young, I didn’t find them very funny because I thought they were making fun of heavy metal, but now I get it, they actually enjoyed it and it was tongue-in-cheek. And this is just the epitome of tongue-in-cheek, every lyric is kind of ridiculous and it still holds up.

S.O.D.
“KING AT THE KING/EVIL IS IN”
Bigger Than The Devil (1999)
Them having a sense of humor was a big inspiration, and this is like a funny sketch, evil is in? And it’s the idea of King Diamond going to Burger King and ordering food, that’s just the height of metal comedy to me. So funny, and it still holds up.

S.O.D.
“WHAT’S THAT NOISE”
Speak English or Die (1985)
It’s just them in the studio messing with the singer, Billy Milano, putting this terrible noise in his headphones while he’s trying to sing. As a listener, you get to hear him get angrier and angrier and it’s the height of comedy.

CHEECH AND CHONG
“EARACHE MY EYE”
Up In Smoke (1978)
Now bear with me…it’s not a metal song to the ears, but it’s a heavy song and it’s super funny, and Scatterbrain did a metal cover of it, where they put more crunchy guitars to it, but the original still makes me laugh. I heard it as a kid, and it stuck with me. It tells a story, it’s kind of like the Joe Walsh song about a crazy rock star at a ridiculous level. It’s still funny to me, it’s one of my favorite comedic songs ever.

STEEL PANTHER
“COMMUNITY PROPERTY”
Feel The Steel (2009)
This one was hard because they’ve written so many funny songs. Even though they wrote them 10 years ago, really not P.C. So, the most P.C. one I could think of is “Community Property.” There’s nothing terrible in the title, but it’s just a funny song. And they’re such a great band, too. What works about them is that the songs are great, and they seem like what just could have been an 80s band, but with these ridiculous lyrics. What makes the song so funny is half in the lyrics and half in Michael Starr delivery. What’s great about it is that they don’t hit you over the head with the jokes, he sings the songs pretty straight.

TENACIOUS D
“TRIBUTE”
Tenacious D (2001)
They’ve got to be on this list, of course, they’re old pals…this song is the closest to metal. For two guys playing acoustic guitar, they got pretty metal. It’s a great song, such a classic, one of the first songs I saw Tenacious D do. I saw them in the 90s coming up, playing around in LA, they made me laugh the first time I saw them, and they still do. I’ve always loved bands that…it’s a hip-hop thing, it’s kind of bragging, they’re talking about how badass they are and it’s hilarious because it’s two kind of chubby guys playing acoustic guitars. But they believe it and you believe it by the end of the song, that they are the greatest rock ‘n’ roll band ever, and you’ve just heard the greatest song you’ve ever heard. It’s better than “Stairway to Heaven,” and better than anything you could ever imagine because it’s Jack and Kyle yelling it at you.

ANTHRAX
“FRIGGIN IN THE RIGGIN”
Aftershock – The Island Years 1985-1990 (2013)
This was a Sex Pistols song, about their crew members, they’re cursing and screaming, and it’s got this sea shanty thing to it, but it’s heavy. The first time I heard it, I thought it was insane, and then as I was listening to the lyrics, they’re making one of their crew sing kind of offensive things about everybody. I don’t know how P.C. it is, I haven’t heard it in a while, but it’s very funny.

POESHN
“METAL BY NUMBERS”
Live In: Nerd Rage (2006)
The first song I wrote with Scott Ian and I still stand by it. It’s a funny song, commenting on a bunch of bands we didn’t like at the time. We weren’t “grandpa metal” then. It was 15 years ago, we were sort of “young dad metal” at that time, although neither one of us had kids yet, but we’ve gotten crustier in the last 15 years. Just a fun song and deserving to be on that list.

Pick up your copy of Grandpa Metal here: https://orcd.co/posehn