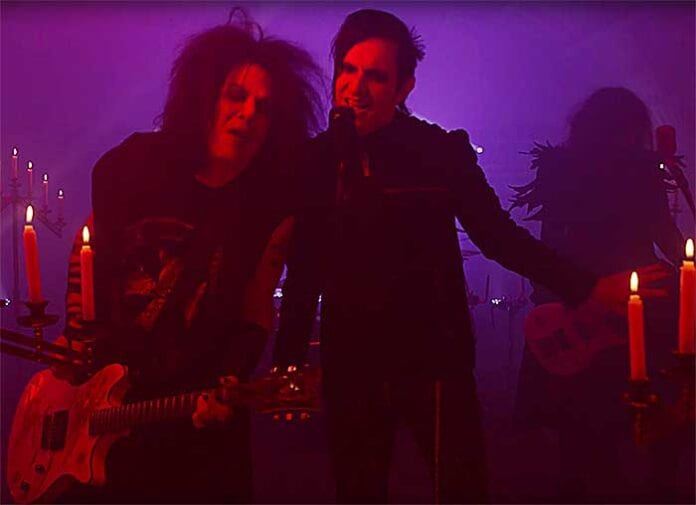 Beauty in Chaos’ new single “A Kind Cruelty” features goth icon CURSE MACKEY and is the second taste of the forthcoming album The Storm Before The Calm, to be released on May 22 via 33.3 Music Collective.

Beauty in Chaos is the brainchild of guitarist Michael Ciravolo. Originally from New Orleans and now based in Los Angeles, he is best known as President of Schecter Guitar Research. He also played guitar in Human Drama for 30 years, in addition to playing live and recording with Michael Aston’s Gene Loves Jezebel since 1998.

This single follows “The Delicate Balance of All Things” featuring The Mission frontman Wayne Hussey, the first single released off this album.

“When Michael Rozon and I finished this music track, I was a bit of a loss for who I should approach about singing this one. Two different friends, Mark Thwaite (Peter Murphy/The Mission) and Steven Seibold (Hate Dept.) both suggested Curse Mackey. I didn’t think I knew him, but it turns out our paths had crossed in our ‘other lives’ in the musical instrument world. I thought his voice would be a great fit, and I especially liked his lyrical sense.  We hit it off well and I really enjoyed working with him on this song and video, and I do look forward to evolving him in future BIC,” says Michael Ciravolo.

The accompanying video was filmed and directed by Vicente Cordero, edited by Leslie Gladney, and produced by Industrialism Films.

“This is the ninth video we have done with Vicente Cordero and Industrialism Films.  I certainly strive to make each one unique, as with BIC not being a band in the traditional sense, the videos are really our ‘face’.  Since it is my goal to make this new album a bit darker than ‘finding beauty in chaos’, I felt ‘a kind cruelty’ really lent itself to going full-on darkwave.  I wanted it to be dark yet fun … even with some tired and true symbolisms and attire!  It’s a bit tongue n’ cheek … or would that be teeth in skin?” asks Michael Ciravolo.

Austin’s Curse Mackey is a prominent performer on the darkwave, post-punk and industrial music scenes. He is known for his prominent participation in PIGFACE and ongoing stints with My Life With The Thrill Kill Kult, plus past projects Evil Mothers and Grim Faeries. In 2019, Mackey released his debut solo album Instant Exorcism, featuring an appearance by Ronny Moorings (Clan of Xymox)’. Mackey has also collaborated with such luminaries as Ogre (Skinny Puppy), Martin Atkins (Ministry/Killing Joke), En Esch (KMFDM), Genesis P-Orridge (Psychic TV), Danny Carey (Tool), and Mat Mitchell (Puscifer).

Mackey recently found himself in the spotlight while filling in for goth legend Peter Murphy in Orlando, who was unable to perform at the final 40 Years of Bauhaus Celebration show in Orlando. Invited by Bauhaus/Love and Rockets bassist David J to stand in on vocals, they played to a sold-out Orlando audience, sowing the seeds for a new collaborative project between Mackey, David J and Rona Rougeheart of alt-electronic darlings SINE.

“When I first heard the instrumental, I was immediately captivated by the driving bassline and uplifting musical chorus. I was inspired by a PT Barnum quote referencing electricity and  to “put a little of it into your blood and we will beat the world” – that was the literal spark that fueled the words. I magined being in the desert under the stars, conjuring the energy to face the world.  I’m excited to be a part of the Beauty in Chaos project and to work with Michael and Tish. I admire them both as artists and entrepreneurs and to also be on a record with Wayne Hussey of The Mission, Seibold of Hate Dept. and the many other talented artists involved gives me a warm fuzzy feeling,” says Curse Mackey.