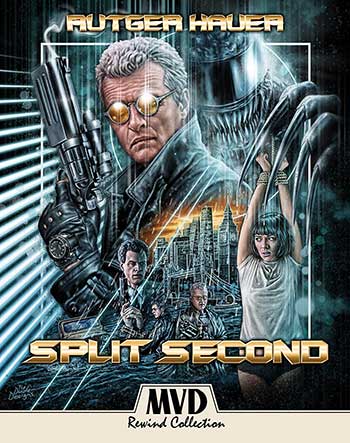 This 1992 film is actually very watchable and quite enjoyable, but there’s always this nagging sentiment about lost potential that’s always lurking behind every corner. The production of Split Second has been described as challenging and difficult by those behind the scenes, with director Tony Maylam (The Burning) heading for the hills at some point, leaving assistant Ian Sharp to finish some scenes off for the final product.

The film doesn’t so much come across as messy as it does confused and unsure, specifically about the story it wants to tell the audience. Split Second is a mixture of sci-fi and horror that focuses on a string of violent serial murders, and their connection with hard-ass detective Harley Stone, played by Rutger Hauer. Hauer is predictably great in the role, quirky with his coffee and chocolate obsession, but hard enough to come across as a legitimate badass. He’s paired with modern voiceover star Neil Duncan as his new partner, an educated health nut who’s saddled with the ridiculous moniker of Dick Durkin.

Hauer and Duncan make a decent team, while Kim Cattrall has little to do as the ex-wife of Stone’s ex-partner with whom Stone had an affair. Cattrall’s character does have some gutsy action moments during the film’s climax, but overall she’s mainly there to show up, take a shower, and get captured. Split Second could’ve benefitted from expanding her arc a bit, but that isn’t the only aspect of the film that leaves room for improvement. For starters, there’s an occult connection to the killings that’s never fleshed out or fully explained, leaving only some tenuous connection to the Scorpio sign and Satanism that flitters away in the wind.

There’s also the physical nature of the killer, who is apparently absorbing DNA along the way from its victims, while also leaving messages in blood for Stone about his return. This is another plot thread that’s never fully realized, despite flashbacks that imply Stone’s former partner was a victim of the monster in the past. The setting of a waterlogged London is great, but also underused, as is the side plot of rat infestation and disease infecting the populous. It’s almost as if Split Second wants to do too much, and is too excited about the creation of its world, that it doesn’t spend enough time making sure that each idea is complete before moving on to the next one.

Thankfully, the film’s cinematography works alongside the solid performances to make the audience forgive a bit of the mess, an 80s action sensibility that lingers on, despite Split Second’s release date of 1992. Gary Scott Thompson’s (The Fast and The Furious franchise) screenplay was actually written in the late 80s, so this makes sense, as the conception of the killer is a somewhat unoriginal mixture of Aliens and Predator so it all ties together. This isn’t to say that the creature is poorly designed, mind you, it’s just that we see so little of it at the end of the day. This was apparently intentional, with the producers and crew going for more of a Jaws vibe of restraint, as opposed to going all out with some creature feature carnage.

This, for me, was a mistake, as Split Second could’ve benefitted from an earlier reveal of its villain, as opposed to saving it all for the final subway sequence. The scene when the claws cover Hauer’s face is one of the film’s best images, and more could’ve been made of the apparent mental connection between the two, but that’s pretty much the story of Split Second in a nutshell: missed opportunities. It’s a fun film and recommended to check out at least once, but this could’ve honestly been a major genre cinema player, instead of the cult film status it inhabits today. And that’s kind of frustrating.

The MVD Blu-ray doesn’t miss ANY opportunities when it comes to the extras, however, as this disc is completely packed to the gills. For starters, there’s a fun audio commentary from film historian Mike Leeder and filmmaker Arne Venema that is pretty much non-stop from the jump, with both men dropping factoids and having great fun watching the film along the way. There are also modern recollections about the film from producer Laura Gregory and co-star Neil Duncan, as well as a chat with composer Stephen Parsons (The Howling II) about his work on the score. Creature effects designer Cliff Wallace, cinematographer Clive Tickner, and line producer Laura Borg are also interviewed, and everyone seems quite game to discuss their jobs on the film and how they feel about the product today.

Vintage featurettes from the film’s original home video release are also included, as well as deleted scenes from the Japanese cut of the film. What’s even cooler is that the full cut of that version is also included here as a full frame extra with burnt in Japanese subtitles. There’s a little bit of artifacting in this version, but the new widescreen print for the main feature looks pretty awesome. There’s some nice grain, solid colors, and no evidence of any major or distracting errors. In other words, Split Second looks as good as it’s probably ever going to look, so kudos to MVD for all of their loving work that clearly went into this restoration and release. ~ George Pacheco