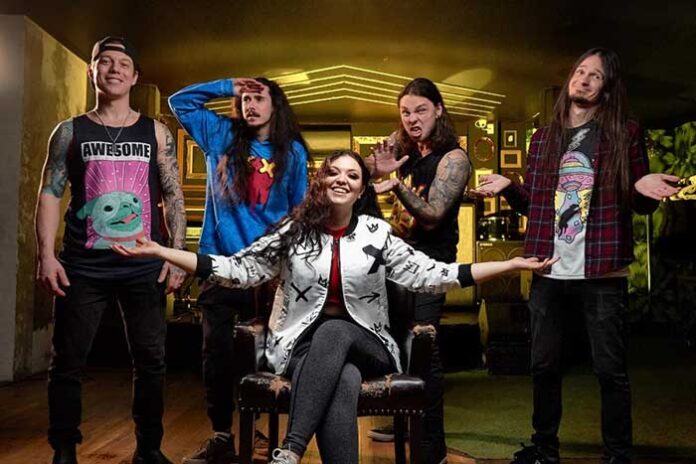 Having both performed a range of styles in numerous heavy bands, Killer V (Vicky Psarakis of The Agonist) and Rob The Ripper (Robby J. Fonts of Stuck Mojo), who are married, wanted to return to a genre that’s close to their hearts, but also make music that is specifically written for two vocalists. Written with dual vocal interplay from a male / female perspective, their performance reflects a personal and fun side of them as people, but also tackles social and societal issues in the world today. Backed by guitarist Breakdown Bran (Bran Panic), drummer The Trve Cody Taylor (Cody Taylor) and bassist Spot-On Sam/SOS (Samuel Bedard), Sicksense would be born out of the band’s desire to share their upbeat and fun message with the world. Sicksense chooses musical inspiration from various bands and those influences shine through in their debut EP, Kings Today.

Rob The Ripper: Slipknot “No Life”

“No Life” from Slipknot is my biggest influence when it comes to my vocal style and lyric writing. Corey Taylor’s rap flow, style of screaming, and lyrics inspired me to learn how to scream and rap over heavy music. He had this charismatically insane frantic energy emanating from his voice that drew me in. You can hear the urgency, anxiousness, pain, anger, fear, and aggression from his voice. The range of emotions he gives listeners from what he does with his voice and his lyrical content just pulls you into his mad world and he takes you on a crazy creative roller coaster ride through Slipknot’s music.

It would be safe to say “Dig” by Mudvayne is the song that influences my playing in Sicksense. Apart from starting with one of the most iconic bass lines in metal history, “Dig” blends heavy and simple lines during the chorus supporting the guitar with one of the craziest slap lines during the verse. That slap line isn’t too upfront, so it’s not the main element of the verses, but when you focus on it, you just know you can’t play it.

The Trve Cody Taylor: Korn “Falling Away From Me”

The simplicity of his groove and fills are enough to move the masses. I feel like playing all kinds of notes can sound a little messy at times. David Silveria was solid as fuck, and Korn’s music fills arenas to this day.

Going back to my first introduction to heavier music, Evanescence was at the top of that list, and Fallen was heavily influential to my writing style in terms of vocal arrangements. As a young teenager, I would find myself singing along to all the choruses on that album because they were catchy, but as an adult going back, I noticed all the vocals/choirs, ornaments, and intersecting melodies in the background that enhanced those main melodies. The reason I chose “Whisper” is because you could not ask for a better ending to that album.

“Make Believe” is the first single we dropped, but it is also the first song we wrote to see what both our voices could sound like together. The song is about embracing what makes you truly unique. It’s about not caving into what other people and outside influences are telling you to do with your life and following a path that is truly your own. From a melodic perspective, listening to “Make Believe” fills you with all kinds of fuzzy warm nostalgia and it’s a great first introduction to what Sicksense is about. – Killer V

“Kings Today” is perhaps our strangest song to date. It’s dark and heavy, with a very ominous intro and some unexpected vocals on the verses/bridges. This song is all about being in this environment where unnecessary arguments are constantly happening and longtime relationships being broken over them. – Killer V

For my verses, I wanted my delivery to have aggression, angst, and frustration in it. I wanted to incorporate a funny sounding voice in the bridge before I started screaming my rant about everyday frustrations we have all been through. “Kings Today” was definitely a lot of quirky fun from a songwriting perspective, and I believe its lyrics are highly relatable. Who doesn’t hate traffic? – Rob The Ripper

“Forgotten Days” was inspired by my grandpa’s passing. His death brought me into a heavy depression. At that point, I wasn’t happy with how my life was going, still trying to “figure out who I was” as a person and what I wanted to do with my life. It’s about dwelling on your failures and responding to them in a negative manner. You get out of that negative headspace by allowing others in, recognizing your faults, and having faith that life will get better, because it certainly does when you give yourself the chance. – Rob The Ripper