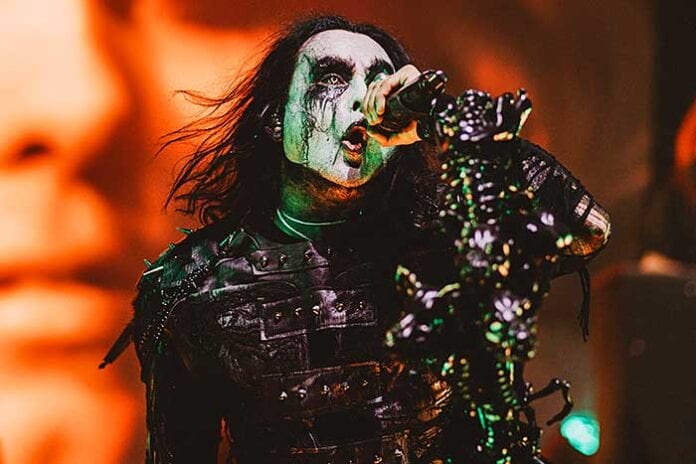 May 12th saw the return of British metal act Cradle of Filth to the stage, albeit in a livestream sense. Proclaimed as the UK’s “most visionary and hellish outfit,” Cradle of Filth aimed to bring a semblance of a live performance to their adoring fans, having been off of the stage for well over a year. With 12 iconic studio albums under their belt, the band certainly doesn’t lack in material, which made this event even more enticing.

After having been rescheduled twice prior due to the pandemic, fans were champing at the bit for their favorite musicians, and the anticipation grew stronger and stronger leading up to the day. Logging into the stream promptly at 2pm (PDT) yielded hundreds and hundreds of commentary on the live chat board, with a worldly audience expressing their excitement that May 12th had finally arrived. This multitude of watchers paid homage to the band’s tremendous history, having accumulated a large fan base and a devilish reputation that attracts metal listeners around the globe.

With such a wait, the pressure was certainly on the band to deliver a performance that made changing dates from 2020 to May 2021 a worthwhile endeavor, and I am pleased to announce that the livestream was indeed worth the delay! The stream opened with an introduction akin to the band’s concert performances, with dim lights and a moody atmosphere.

Once the screen illuminated enough to see the details, a massive stage was revealed. Specially built for this performance, it was clear as day to see the amount of effort, care, and planning that went into this performance on the part of the band and their production crew. This attention to detail manifested in a livestream that definitely pushed itself far ahead from many of the other streams happening in this past year. Opening with “At the Gates of Midian,” once the first trace of sound hit my speakers, I knew this was going to be something spectacular. The audio quality was superb, although facets of this aspect depends upon the speakers you are using.

The set list was full of crowd-pleasers, ranging in eras from early 90s all the way to Cryptoriana. Tracks such as “Nymphetamine” and “Heartbreak and Seance”received overwhelming praise in the chatbox, akin to the excitement rendered at every Cradle of Filth concert before. Nostalgic to set lists of the past, the band certainly found an exquisite formula with their song choices, as each track elegantly bleeds into the next—not an easy feat considering key stylistic changes between records. With recent press teasing at Existence Is Futile, the title of the band’s 13th studio album, there was a curious desire to see if the band would preview anything off of the forthcoming record. Alas, lips remained sealed on this one.

Certainly not for the faint of heart, much of the imagery displayed throughout the performance was familiar, encompassing the morbid and macabre beauty the band has been known for. The stream editing was beautiful in and of itself, with much of the visual elements of the ever-changing screen behind the band being transformed into overlays atop the live performance video. Cinematic elements blended effortlessly between live visuals and Cradle’s handpicked footage to help further tell the songs’ stories.

It’s even worth noting that the quality of the camera handling matched with quality of the audio. The image was comparable to that of a live documentary, crisp and clear with fluid motion and easy transitions. The various vantage points really set you into the event itself, several mimicking the perspective of a concert venue.

Besides the music itself, this streaming performance will forever be a part of Cradle of Filth’s history, as they announced the newest member of the band, Anabelle Iratni. Following Lindsay Schoolcraft’s departure in February 2020, Anabelle took over keyboard and vocal duties, bellowing out fantastic ballads and melodies to complement Dani’s voice. This is a bit of a familiar endeavor, as those following all of Dani’s projects would recognize Anabelle from Devilment.

In the style of a grand encore, the conclusion of the set pulled out all of the stops, activating all of the pyro effects and launching them into pulsing dances and riveting flame walls. You could truly see how much the band members were giving themselves into this performance, with beads of sweat and running makeup ending the final moments of the show. “From the Cradle to Enslave”ended the performance, a powerful send off into the abyss…until next time.

For those that weren’t able to tune in but still purchased tickets, the stream will be rewatchable for a few weeks post-live performance.